To mark the Hubble Space Telescope's tenth anniversary, ESA is hosting a press conference at the Space Telescope-European Coordinating Facility (ST-ECF) in Munich on Thursday 27 April .With the astronauts who took part in the most recent Servicing Mission (SM3A) in attendance, ESA is taking the opportunity to give a - first - complete overview of Europe's major contribution to the HST mission. It will also review the first ten years of operations and the outstanding results that have 'changed our vision' of the cosmos. A new fully European outreach initiative - the 'Hubble European Space Agency Information Centre' - will be presented and officially launched it has been set up by ESA to provide information on Hubble from a European perspective.The new Hubble ESA Information Centre web pages go online here on 27 April.

Not only has Hubble produced a rich harvest of scientific results, it has impressed the man in the street with its beautiful images of the sky. Thousands of headlines all over the world have given direct proof of the public's great interest in the mission - 'The deepest images ever', 'The sharpest view of the Universe', 'Measurements of the earliest galaxies' and many others, all reflecting Hubble's performance as a top-class observatory.

Over the next 10 years European scientists still plan to use Hubble as one of their prime research tools, but they also expect to benefit from synergy between Hubble and the ground-based 8-metre class telescopes that are becoming available to scientists in Europe.

The Hubble Space Telescope is an international cooperation project between the National Aeronautics and Space Administration (NASA) and the European Space Agency (ESA).

The partnership agreement between ESA and NASA was signed on 7 October 1977. ESA has provided, among other items, two pairs of solar panels and one of Hubble's scientific instruments (the Faint Object Camera). 15 European scientists are contributing to the science operation of the Hubble Observatory and are currently working at the Space Telescope Science Institute in Baltimore (STScI). In return for this contribution, European astronomers have guaranteed access to 15% of Hubble's observing time.

Scientific operation of the Hubble Observatory is the responsibility of the Space Telescope Science Institute, which is run for NASA by the Association of Universities for Research in Astronomy (AURA).

as part of the recently upgraded ESA Science website http://sci.esa.int 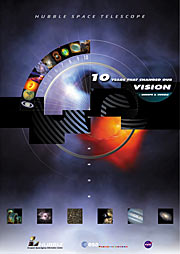