January 2007 - A stunning HD image of the Pinwheel Galaxy. 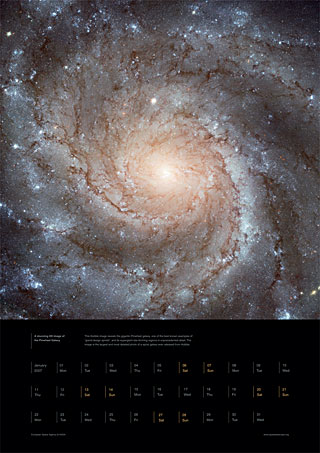 This Hubble image reveals the gigantic Pinwheel galaxy, one of the best known examples of "grand design spirals", and its supergiant star-forming regions in unprecedented detail. The image is the largest and most detailed photo of a spiral galaxy ever released from Hubble.

Credit:
European Space Agency & NASA
Usage of ESA/Hubble Images and Videos
Are you a journalist? Subscribe to the ESA/Hubble Media Newsletter.