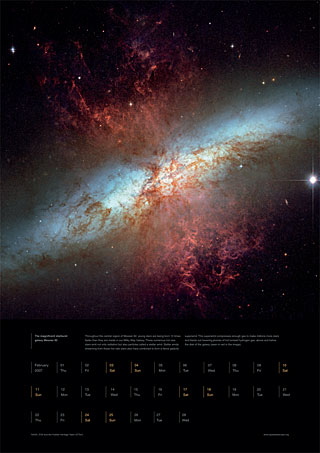 Throughout the central region of Messier 82, young stars are being born 10 times faster than they are inside in our Milky Way Galaxy. These numerous hot new stars emit not only radiation but also particles called a stellar wind. Stellar winds streaming from these hot new stars also have combined to form a fierce galactic superwind.

This superwind compresses enough gas to make millions more stars and blasts out towering plumes of hot ionised hydrogen gas, above and below the disk of the galaxy (seen in red in the image).

Credit:
NASA, ESA and the Hubble Heritage Team (STScI)
Usage of ESA/Hubble Images and Videos
Are you a journalist? Subscribe to the ESA/Hubble Media Newsletter.