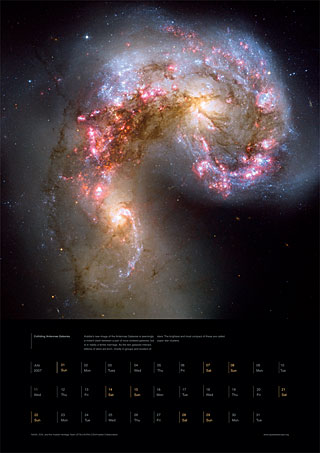 Hubble's new image of the Antennae galaxies is seemingly a violent clash between a pair of once isolated galaxies, but is in reality a fertile marriage. As the two galaxies interact, billions of stars are born, mostly in groups and clusters of stars. The brightest and most compact of these are called super star clusters.

Credit:
NASA, ESA, and the Hubble Heritage Team (STScI/AURA)-ESA/Hubble Collaboration
Usage of ESA/Hubble Images and Videos
Are you a journalist? Subscribe to the ESA/Hubble Media Newsletter.