February 2008 - The colourful demise of a Sun-like star 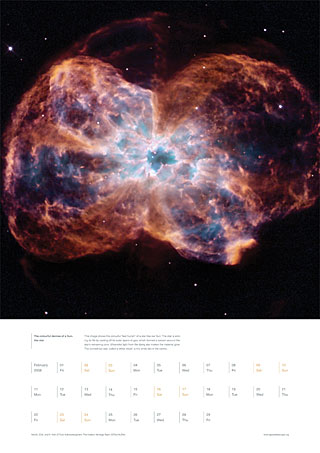 This image shows the colourful “last hurrah” of a star like our Sun. The star is ending its life by casting off its outer layers of gas, which formed a cocoon around the star’s remaining core. Ultraviolet light from the dying star makes the material glow. The burned-out star, called a white dwarf, is the white dot in the centre.

Credit:
NASA, ESA, and K. Noll (STScI)
Usage of ESA/Hubble Images and Videos
Are you a journalist? Subscribe to the ESA/Hubble Media Newsletter.