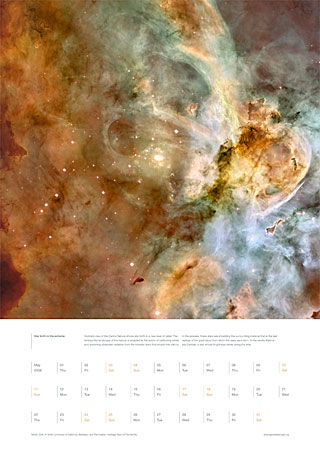 Hubble’s view of the Carina Nebula shows star birth in a new level of detail. The fantasy-like landscape of the nebula is sculpted by the action of outflowing winds and scorching ultraviolet radiation from the monster stars that inhabit this inferno. In the process, these stars are shredding the surrounding material that is the last vestige of the giant cloud from which the stars were born. In the centre there is eta Carinae, a star whose brightness varies along the time.

Credit:
NASA, ESA, N. Smith (University of California, Berkeley), and The Hubble Heritage Team (STScI/AURA)
Usage of ESA/Hubble Images and Videos
Are you a journalist? Subscribe to the ESA/Hubble Media Newsletter.