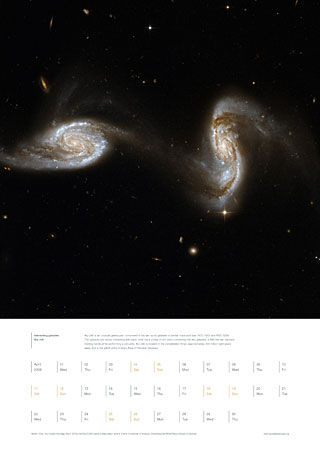 Arp 240 is an unusual galaxy pair, composed of the two spiral galaxies of similar mass and size, NGC 5257 and NGC 5258. The galaxies are visibly interacting with each other via a bridge of dim stars connecting the two galaxies, a little like two dancers holding hands while performing a pirouette. Arp 240 is located in the constellation Virgo, approximately 300 million light-years away, and is the 240th entry in Arp’s Atlas of Peculiar Galaxies.

Credit:
NASA, ESA, the Hubble Heritage Team (STScI/AURA)-ESA/Hubble Collaboration and A. Evans (University of Virginia, Charlottesville/NRAO/Stony Brook University)
Usage of ESA/Hubble Images and Videos
Are you a journalist? Subscribe to the ESA/Hubble Media Newsletter.