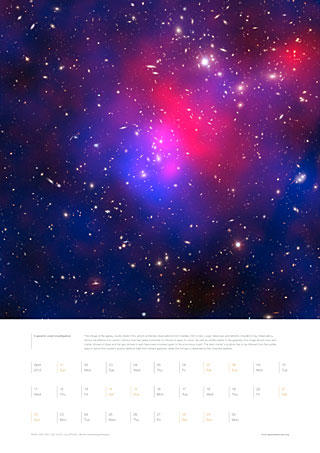 This image of the galaxy cluster Abell 2744, which combines observations from Hubble, ESO’s Very Large Telescope and NASA’s Chandra X-ray Observatory, shows the effects of a cosmic collision that has taken hundreds of millions of years to unfurl. As well as visible matter in the galaxies, this image shows how dark matter (shown in blue) and hot gas (shown in red) have been knocked apart in the enormous crash. The dark matter’s location has to be inferred from the subtle ways in which the cluster’s gravity deflects light from distant galaxies, while the hot gas is detected by the Chandra satellite.