April 2013 – Preview of a forthcoming supernova 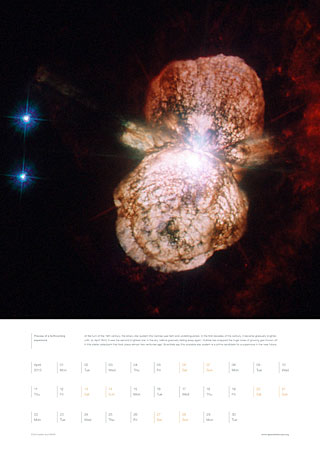 At the turn of the 19th century, the binary star system Eta Carinae was faint and undistinguished. In the first decades of the century, it became gradually brighter, until, by April 1843, it was the second brightest star in the sky, before gradually fading away again. Hubble has snapped the huge lobes of glowing gas thrown off in this stellar cataclysm that took place almost two centuries ago. Scientists say this unstable star system is a prime candidate for a supernova in the near future.