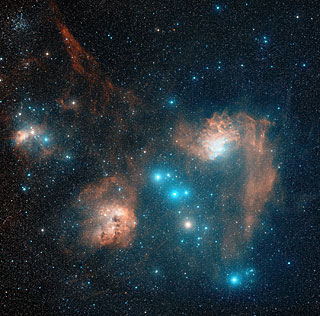 Rippling dust and gas lanes give the Flaming Star Nebula its name. The red and blue colors of the nebula are present in different regions and are created by different processes. The bright star AE Aurigae is so hot it is blue, emitting light so energetic it knocks electrons away from surrounding gas. When a proton recaptures an electron, red light is frequently emitted. The blue region's color is a mix of this red light and blue light emitted by AE Aurigae but reflected to us by surrounding dust. The two regions are referred to as emission nebula and reflection nebula, respectively. The Flaming Star Nebula, officially known as IC 405, lies about 1500 light years distant, spans about 5 light years, and is visible with a small telescope toward the constellation of Auriga. One and a half degree East from the Flaming Star Nebula is located IC 410, a region of faint nebulosity surrounding the open star cluster NGC 1893. The cluster itself is small and located just below center, underneath the central dust region of the nebula. This nebula contains complex wisps of gas and is a beautiful target for astrophotography. (Text adapted from Astronomy Picture of the Day). This image is a composite from black and white images taken with the Palomar Observatory's 48-inch (1.2-meter) Samuel Oschin Telescope as a part of the second National Geographic Palomar Observatory Sky Survey (POSS II). The images were recorded on two glass photographic plates - one sensitive to red light and the other to blue and later they were digitized. Credit: Caltech, Palomar Observatory, Digitized Sky Survey. In order to produce the color image seen here, I worked with a total of 56 different frames, 28 for each color band, coming from 4 different plates taken between 1988 and 1996. Original file is 11,144x9,801 pixels with a resolution of about 1 arcsec per pixel. The image show an area of sky large 3.1ø x 2.7ø (for comparison, the full-Moon is about 0.5ø in diameter).

This fits liberator image is not available for sale.

Credit:
Davide De Martin & the ESA/ESO/NASA Photoshop FITS Liberator
Usage of ESA/Hubble Images and Videos
Are you a journalist? Subscribe to the ESA/Hubble Media Newsletter.

About the FITS Image