A planet is a celestial body that is in orbit around the Sun, has enough mass to be roughly round in shape and has significantly more gravitational attraction than anything else near it.

The formal definition of what counts as a planet was decided upon by the International Astronomical Union (IAU) in August 2006. Firstly, for a celestial body to be classified as a planet, it has to orbit our Sun — meaning it must exist within our Solar System. Secondly, it must have enough mass that its gravity has formed it into an approximately round shape (in contrast to, for example, asteroids, which have irregular shapes). Finally, it must be the most gravitationally dominant object locally, meaning that it has cleared its neighbourhood of other celestial objects of significant mass (except for any of its satellites, such as a moon). It is this final criterion that caused Pluto to be demoted from a planet to a dwarf planet, as Pluto is not gravitationally dominant — it is actually affected by Neptune’s gravity and many objects in the Kuiper belt. Only eight known celestial bodies qualify as planets in our Solar System: Mercury, Venus, Earth, Mars, Jupiter, Saturn, Uranus and Neptune.

Hubble's high-resolution images of the planets and moons in our Solar System can only be surpassed by pictures taken from spacecraft that actually visit them. Hubble even has one advantage over these probes: it can look at these objects periodically and so observe them over much longer periods (years) than any passing probe could.

Unlike probes that have to travel vast distances and require years of planning to visit the planets, Hubble is also able to turn its attention to sudden dramatic events occurring in the Solar System. This allowed it to witness the stunning plunge of comet Shoemaker-Levy 9 into Jupiter’s atmosphere during the period 16–22 July 1994.

Hubble has observed all the planets in our Solar System, apart from Earth and Mercury. Earth is far better studied by geologists on the ground and specialised probes in orbit. Hubble can’t observe Mercury as it is too close to the Sun, whose brightness would damage the telescope’s sensitive instruments.

Hubble has also seen unprecedented detail in Jupiter’s aurorae by utilising the telescope’s ultraviolet capabilities.The telescope has also taken detailed images of Mars, Saturn, Uranus, and more. Regular monitoring of planetary surfaces is vital in the study of planetary atmospheres and geology, where evolving weather patterns such as dust storms can reveal much about the underlying processes. Hubble can also observe geological phenomena such as volcanic eruptions directly.

Image A
Mars and Saturn close to opposition 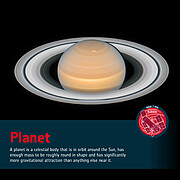 Planet
A planet is a celestial body that is in orbit around the Sun, has enough mass to be roughly round in shape and has significantly more gravitational attraction than anything else near it.