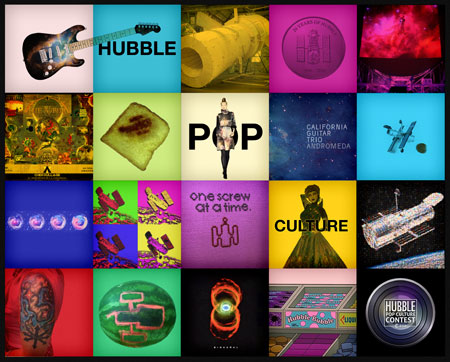 After 20 years of pointing its cameras into the depths of space, the NASA/ESA Hubble Space Telescope is quite a star here on Earth too. Whether it is on a biceps tattoo or a piece of toast, in a fashion show, at a rock concert, or on the show Late Night with Jimmy Fallon, Hubble has become part of our lives through popular culture.

This summer, ESA/Hubble ran a competition to find the weirdest, funniest and most inspiring examples of Hubble as a cultural icon. From album covers to a brilliant life-size wooden model made by Australian artist Peter Hennessey, the entries showed how science and creativity come together. Some of the most eye-catching entries are featured in a new episode of the Hubblecast, which looks at the cosmic inspiration behind them. The video is available in a range of formats including high definition at: http://www.spacetelescope.org/videos/hubblecast38a/

The winners of the competition are:

And the special jury prize went to Michael Grabois (USA), for spotting that Pearl Jam’s 2000 album Binaural sports a Hubble picture of the Hourglass Nebula on its cover.

Full details of the entrants and the prizes are on the competition web page.

Although the competition is over, the Hubble Flickr group will remain open for all those who spot Hubble here on Earth and wish to share their discoveries with us.