The star that changed the Universe

Though the Universe is filled with billions upon billions of stars, the discovery of a single variable star in 1923 altered the course of modern astronomy. The star goes by the inauspicious name of Hubble variable number one, or V1, and resides in the outer regions of our neighbouring Andromeda Galaxy, or Messier 31.

In the early 1900s, most astronomers considered the Milky Way to be a single island universe of stars, with nothing observable beyond its boundaries. The Andromeda Galaxy was catalogued as just one of many faint, fuzzy patches of light that astronomers called spiral nebulae.

Were these spiral nebulae part of the Milky Way or were they independent island universes lying outside our galaxy? Astronomers didn’t know for sure, until Edwin Hubble found a star in Andromeda that brightened and faded in a predictable pattern, like a lighthouse beacon, and identified it as V1, a Cepheid variable.

This special type of star had already been shown to be a reliable distance marker within our galaxy, because the rate at which it brightens and fades is proportional to its peak brightness: the brighter the star, the slower the fluctuations. By comparing the star’s apparent brightness in the sky with the brightness predicted by the fluctuations, astronomers can deduce how far away it is.

Edwin Hubble’s measurements of the star showed that Messier 31 was far beyond our Milky Way and this settled the debate over the status of the spiral nebulae.

Nearly 90 years later, V1 is in the spotlight again. Astronomers pointed Edwin Hubble’s namesake, the NASA/ESA Hubble Space Telescope, at the star once again, in a symbolic tribute to the legendary astronomer’s milestone observation.

The full story of how Edwin Hubble discovered V1, and how amateur astronomers teamed up with the world’s most famous orbiting observatory to study it, is told in a fascinating article on NASA’s Hubble website. 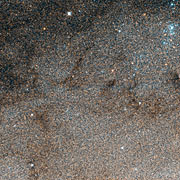 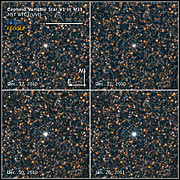 PR Image opo1115d
Snapshots of the star that changed the Universe