Snapshots of the star that changed the Universe 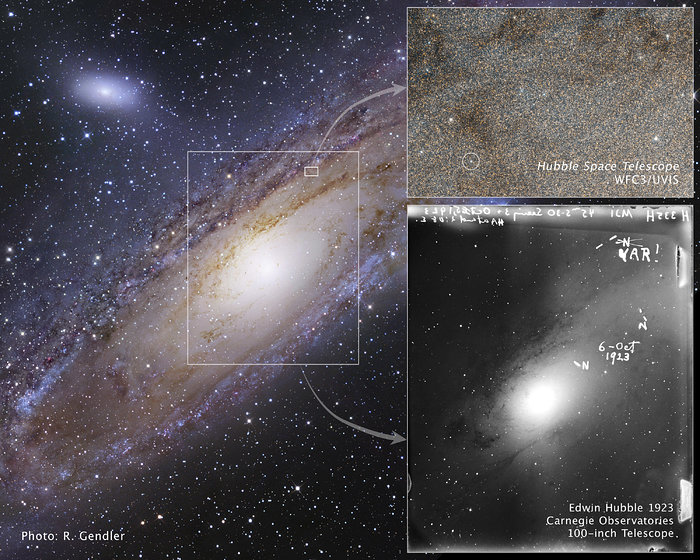 Views of a famous pulsating star taken nearly 90 years apart and a portrait of its galactic home are shown in this image collection.

The pancake-shaped disk of stars, gas, and dust that make up the Andromeda galaxy, or M31, is shown in the image at left. Andromeda is a Milky Way neighbor and resides 2 million light-years away.

The tiny white box just above centre outlines the Hubble Space Telescope view. An arrow points to the Hubble image, taken by the Wide Field Camera 3. The snapshot is blanketed with stars, which look like grains of sand.

The white circle at lower left identifies Hubble variable number one, or V1, the Cepheid variable star discovered by astronomer Edwin Hubble in 1923. Cepheid variables are pulsating stars that brighten and fade in a predictable pattern. Astronomers use them to calculate how far away they are from Earth.

The large white box outlines the region imaged by astronomer Edwin Hubble, who used the 100-inch Hooker telescope, the most powerful telescope of that era. An arrow points to a copy of Hubble's image of Andromeda, which was made on a 4-inch-by-5-inch (approximately 10 x 13 cm) glass plate and dated 6 October 1923.

Edwin Hubble originally identified three novae, a class of exploding star, by writing "N" next to each object. Later, Hubble realized that the nova at top right was actually a Cepheid variable. He crossed out the "N" and wrote "VAR," for variable. This star allowed Hubble to calculate a reliable distance to Andromeda, proving that it was a separate galaxy outside our Milky Way.

Notes: Observation data refers to the top right image from the Hubble Space Telescope. The left image was captured by astrophotographer R. Gendler, and the bottom right image by Edwin Hubble back in 1923.