ESA/Hubble is pleased to announce the release of the Hubble Catalog of Variables, the first full, homogeneous catalogue of variable sources based on archival HST data. The HCV was developed over four years by a team of astronomers at the National Observatory of Athens, led by Alceste Bonanos and sponsored by ESA in collaboration with STScI.

The HCV is now available to the community via the ESA Hubble Science Archive (eHST) at ESAC and MAST at STScI, and can easily be explored using the HCV Explorer, a visualisation tool developed at ESAC specifically to navigate the HCV and look up your favorite object(s) or field(s)!

Despite not being a survey telescope, the Hubble Space Telescope (HST) has obtained multi-epoch observations under multiple, diverse observing programmes. This provides the opportunity for a comprehensive variability search that aims to uncover new variables over a range of magnitudes that is difficult to reach with ground-based telescopes. The magnitude depth and the superb resolution achieved by Hubble, along with the long time-baseline of its operation, are the features that make such a variable source catalogue unique. The Hubble Source Catalog (HSC), which is built out of publicly available images obtained with the WFPC2, ACS and WFC3 instruments, provides photometric measurements of all sources detected from a homogeneous reduction and analysis of Hubble archival images, thereby enabling such a variability search.

The HCV is the deepest catalogue of variables available. In total, the HCV includes 84 428 candidate variable sources (out of 3.7 million HSC sources that were searched for variability) with V ≤ 27 mag; for 11 115 of them the variability is detected in more than one filter. The data points in a light curve range from 5 to 120, the time baseline ranges from under a day to over 15 years, and ∼ 8% of variables have amplitudes in excess of 1 mag. Variable source identification in a large and inhomogeneous set of photometric measurements has been challenging. Bonanos and her collaborators adopted magnitude-dependent thresholding in median absolute deviation (a robust measure of light curve scatter) combined with sophisticated preprocessing techniques and visual quality control to identify and validate variable sources observed by Hubble five or more times with the same instrument and filter combination. Visual inspection performed on a subset of the candidate variables suggests that at least 80% of the candidate variables that passed an automated quality control are true variables, rather than spurious detections resulting from blending, residual cosmic rays or calibration errors. A detailed description of the methodology and results is provided in Bonanos et al. (2019).

The HCV is expected to become a key resource for the community, as it includes variable stars in the Milky Way and nearby galaxies, as well as transients and variable AGN, including low-luminosity AGN. Possible uses include: searches for new variable objects of a particular type for population analysis; detection of unique objects worthy of follow-up studies; identification of sources observed at other wavelengths; and photometric characterisation of candidate progenitors of SNe and other transients in nearby galaxies. The HCV contains many interesting high-amplitude variables, which require further study. 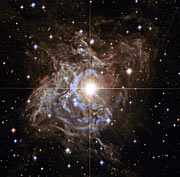