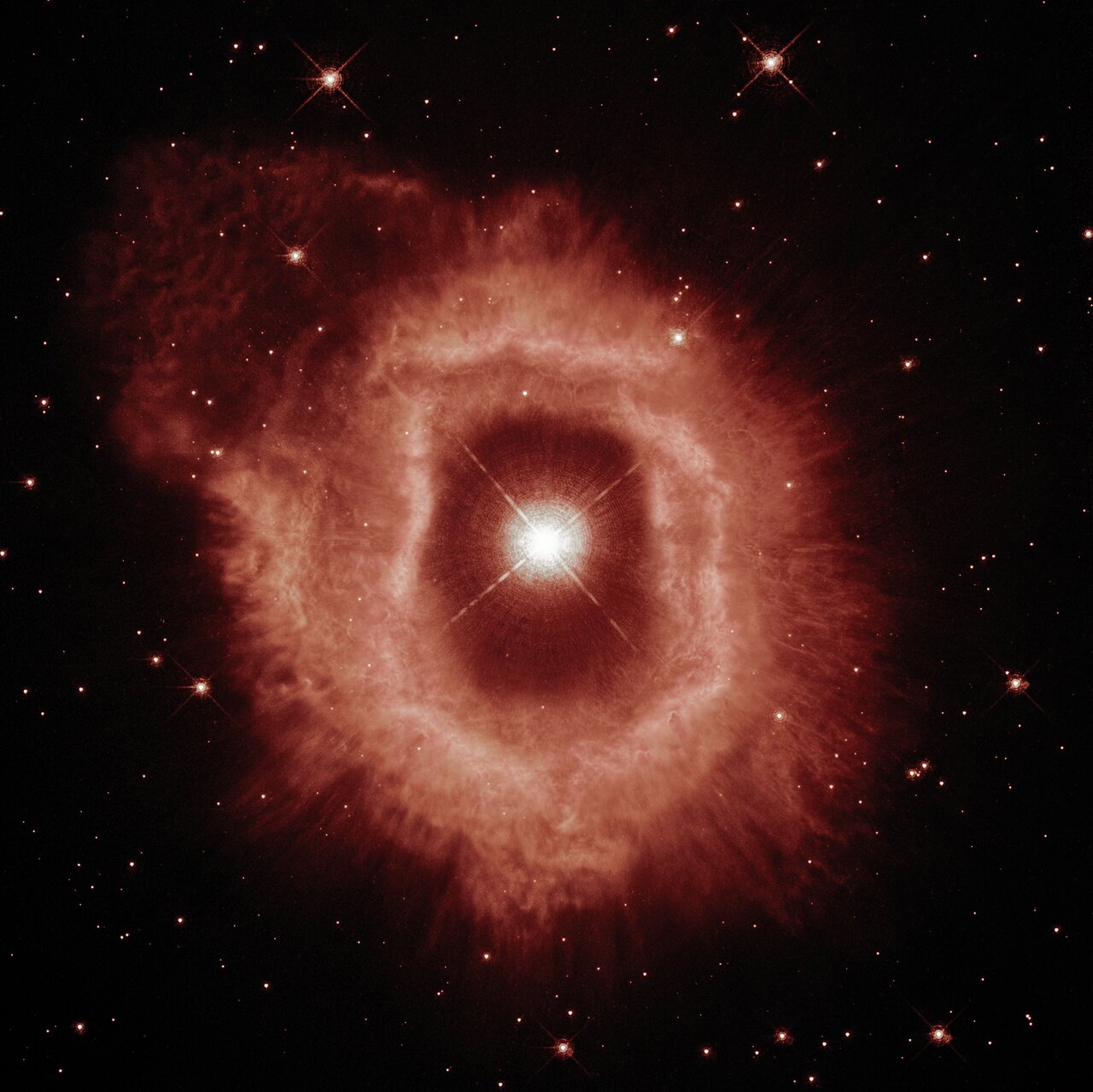 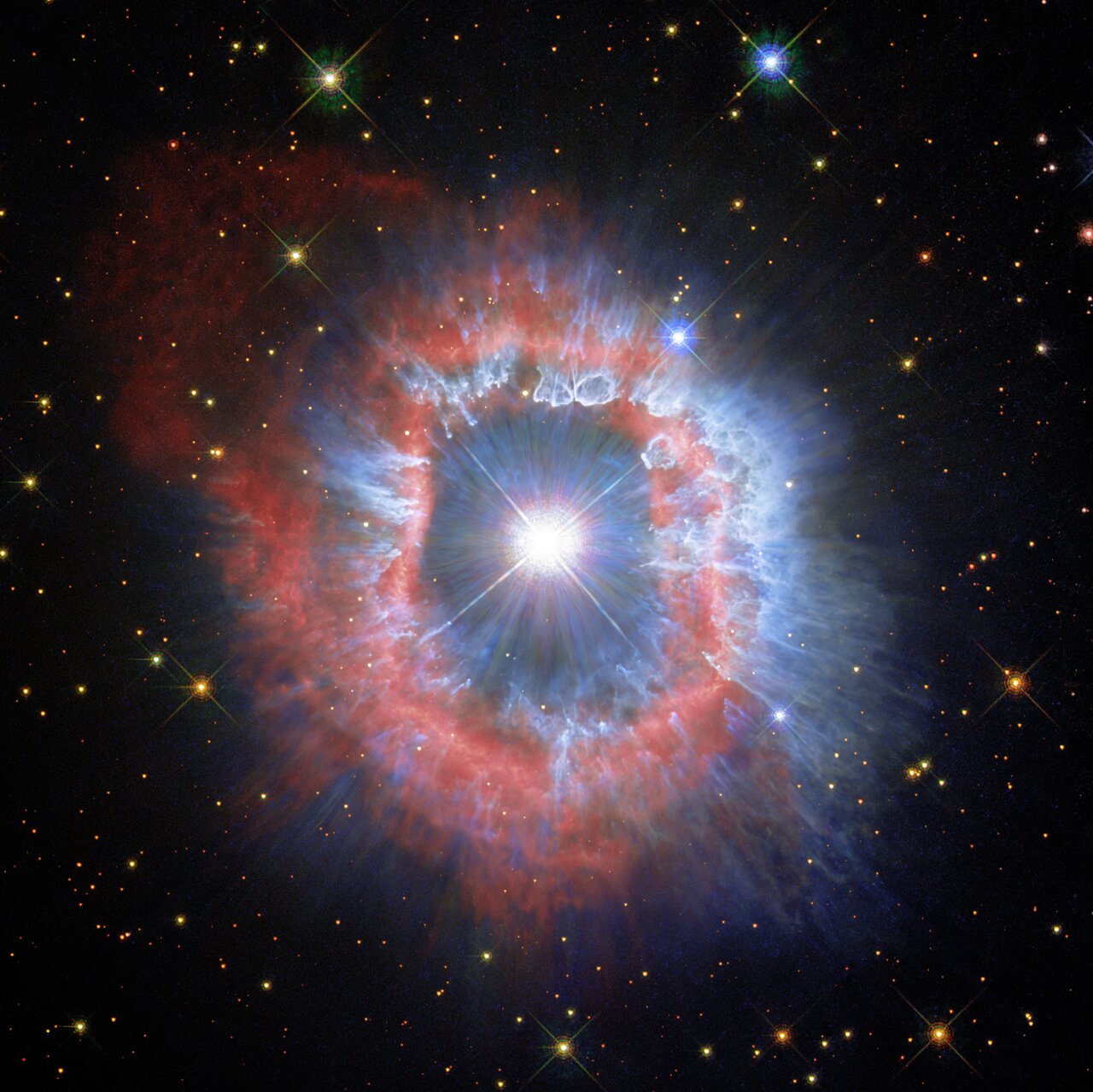 This comparison view shows puffing dust bubbles and an erupting gas shell — the final acts of a monster star.You can explore the detail of the nebula surrounding the star AG Carinae by using the slider tool on the image above.

This Picture of the Week showcases new views of the dual nature of the star AG Carinae, which was the target of the NASA/ESA Hubble Space Telescope’s 31st anniversary image in April 2021. This new perspective was developed thanks to Hubble’s observations of the star in 2020 and 2014, along with others captured by the telescope’s WFPC2 instrument in 1994.

The first image showcases the details of the ionised hydrogen and ionised nitrogen emissions from the nebula (seen here in red). In the second image, the blue demonstrates the contrasting appearance of the distribution of the dust that shines of reflected stellar light. Astronomers believe that the dust bubbles and filaments formed within and were shaped by powerful stellar wind .

This giant star is waging a tug-of-war between gravity and radiation to avoid self-destruction. The star is surrounded by an expanding shell of gas and dust — a nebula — that is shaped by the powerful winds emanating from the star. The nebula is about five light-years wide, equal to the distance from here to our nearest star, Alpha Centauri.

AG Carinae is formally classified as a Luminous Blue Variable because it is hot (blue), very luminous, and variable. Such stars are quite rare because there are not many stars that are so massive. Luminous Blue Variable stars continuously lose mass in the final stages of their life, during which a significant amount of stellar material is ejected into the surrounding interstellar space, until enough mass has been lost that the star has reached a stable state.

AG Carinae is surrounded by a spectacular nebula, formed by material ejected by the star during several of its past outbursts. The nebula is approximately 10 000 years old, and the observed velocity of the gas is approximately 70 kilometres per second. While this nebula looks like a ring, it is in fact a  hollow shell rich in gas and dust, the centre of which has been cleared by the powerful stellar wind travelling at roughly 200 kilometres per second. The gas (composed mostly of ionised hydrogen and nitrogen) is visible to us in these images as a thick bright red ring, which appears doubled in places — possibly the result of several outbursts colliding into each other. The dust, here visible in blue, has formed in clumps, bubbles and filaments that are shaped by the stellar wind.

Scientists who observed the star and its surrounding nebula note that the ring is not  perfectly spherical; it appears to have a bipolar symmetry, indicating that the mechanism producing the outburst may have been caused by the presence of a disc in the centre, or that the star is not alone but might have a companion (known as a binary star). An alternative and simpler theory is that the star rotates very fast (as many massive stars have been found to do). 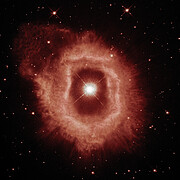 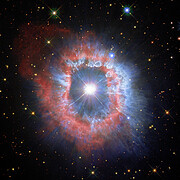