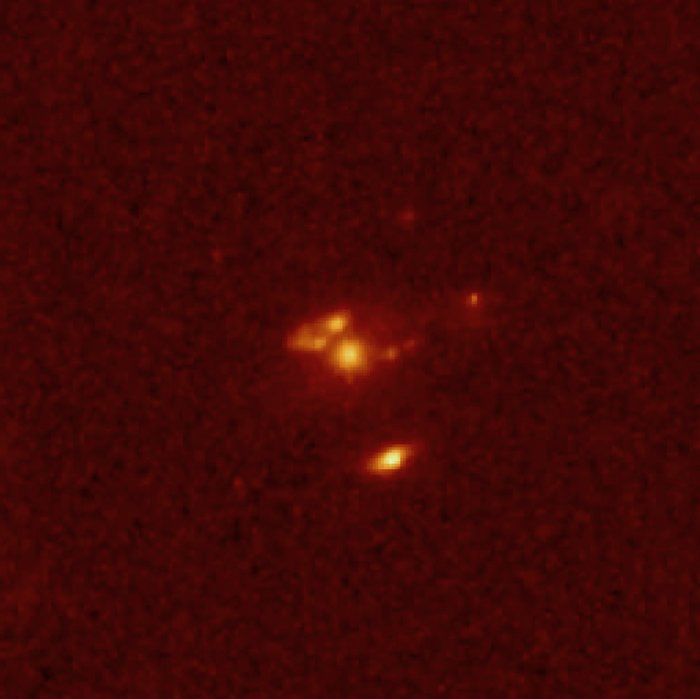 This NASA/ESA Hubble Space Telescope image was taken with the Wide Field and Planetary Camera 2 (WFPC2) in red light. The image shows a detailed view of the galaxy SMM J14011+0252, also called J1/J2, which was first observed with the SCUBA (Sub-millimetre Common User Bolometer Array) instrument on the James Clerk Maxwell Telescope in Hawaii. This galaxy belongs to an enigmatic 'hidden' population of galaxies in the early Universe. A group of European and American astronomers led by Jean-Paul Kneib has used Hubble and the gravitational amplification of the galaxy cluster to make the first observation of one of these distant massively star-forming 'dusty' galaxies revealed in the process of formation. The two components of the galaxy, J1 (centered) and J2 (below), are only separated by 50, 000 light years, but have quite different structure. J1 is redder and shows complex structure - very different than optically selected galaxies seen at the same epoch. J2 is bluer and is very compact. Most of the dust emission detected with SCUBA is likely to come from J1. The finest details in J1 are less than 1, 000 light years large - when corrected for the distortions due to the gravitational lens.