Unveiling the nature of a dusty galaxy

The ESA/NASA Hubble Space Telescope has made the first detailed optical observations of an example of a remarkable class of galaxies by using the additional magnifying power of a huge galaxy cluster to extend its range. The galaxy, named J1/J2, belongs to a remote population of galaxies. Although extremely luminous, the galaxies are obscured by enormous quantities of dust - the smoky residue of the life cycle of massive stars - and have so far only been seen by sub-millimetre telescopes. The Hubble observation has enabled astronomers to investigate the connection between this distant population of 'hidden' dust-enshrouded, intensely star-forming galaxies and the less dusty galaxies that are readily observed with optical telescopes.

Clusters of galaxies can act as a gravitational lens, magnifying and distorting the galaxies behind them and so are also known as 'natural telescopes'. The well-known 'gravitational arcs' are a result of gravitational lensing by large clusters. Galaxy clusters can amplify the light from background objects by up to 100 times, but generally the magnification power is an order of magnitude less - comparable to that of a pair of binoculars.

A group of European and American astronomers led by Jean-Paul Kneib from the Observatoire Midi-Pyrenees (Toulouse, France) has used the massive galaxy cluster Abell 1835 as a gravitational telescope. By supplementing the high resolution and sensitivity of Hubble the astronomers have made the first detailed optical observations of an enigmatic 'hidden' population of galaxies - galaxies that have formed stars so quickly that their light is smothered in the ashes of their recently deceased forbears. These galaxies have previously been detected with the SCUBA (Sub-millimetre Common User Bolometer Array) instrument on the James Clerk Maxwell Telescope in Hawaii.

When SCUBA started observing the sky with unprecedented sensitivity in the sub-millimetre waveband three years ago, it unveiled vigorous star-forming activity in the early Universe and hundreds of otherwise invisible galaxies were seen. SCUBA detects radiation from dust in distant star-forming galaxies. The dust has absorbed light from massive newborn stars and then re-emitted it as sub-millimetre radiation. Many astronomers believe that the objects seen by SCUBA hold the key to determining when the first generation of stars began to shine in massive galaxies.

ESA/NASA Hubble Space Telescope observations of the galaxy SMM J14011+0252, or J1/J2 for short, have made it possible to investigate the connection between the older population of dust-enshrouded, intensely star-forming galaxies, normally seen only by telescopes such as SCUBA, and the more recent, less dusty galaxies usually observed with optical telescopes. 'We believe that J1/J2 provides the first detailed view of the formation of giant elliptical galaxies similar to those we see in galaxy clusters in the Universe today. The different clumps of matter we see in J1/J2 are the building blocks for such galaxies as they merge together', says group leader Jean-Paul Kneib.

When using conventional observations made in visible light astronomers can see only a small fraction of the radiation emitted by galaxies in the remote Universe. This is because in most of these young galaxies star formation is very active. The most massive stars in these regions end their brief lives in spectacular explosions - supernovae - and produce huge quantities of opaque dust that hide their parent galaxy from view. SCUBA observes the re-emitted radiation from the very same dust that makes conventional observations impossible and therefore gives a more complete picture of very early galaxy formation. The observations from SCUBA indicate that these distant dusty galaxies are a thousand times more numerous in the young Universe than they are today, showing that star-forming galaxies have evolved significantly over time. This is also confirmed by observations with ESA's Infrared Space Observatory (ISO).

Unfortunately SCUBA observations are of very low resolution (they are not very 'sharp'), which makes it difficult to determine the position and impossible to make out the appearance of the observed objects. The superior resolution of Hubble has now made it possible to see what one of these galaxies really looks like.

J1/J2 is the first 'pure' star-forming remote sub-millimetre galaxy resolved in detail with an optical telescope and the observations have provided important information about the structure of a massive galaxy during its earliest phase of formation. The galaxy is at a distance of approximately 12 billion light years, so we see it as it appeared when the Universe was only about 20% of its present age. The Hubble observations reveal that the SCUBA source is made of two large clumps of matter, J1 and J2, at the same distance separated by 2 arcseconds on the sky (equivalent to a distance between them of 50,000 light years) and show interesting detail. In particular the dustier clump, J1, shows a complex sub-structure with several smaller areas teeming with the formation of new hot stars.

Ian Smail from the University of Durham, United Kingdom, explained 'Several groups of astronomers have worked hard to understand the nature of sub-millimetre sources by searching for these objects in visible light and thereby uncover their role in the formation and evolution of galaxies. The new results finally start to lift the dusty veil blocking our view.'

The properties of this galaxy and others in the sub-millimetre galaxy population should provide unique insights into the formation and early evolution of galaxies. These 'hidden' dusty galaxies will be the subject of more detailed investigations when large infrared and sub-millimetre observatories are completed in the near future. ESA's far-infrared FIRST mission will be launched in 2007, the near-and mid-infrared NASA/ESA/CSA Next Generation Space Telescope will be launched in 2009 and the ground-based international Atacama Large Millimetre Array (ALMA) will be finished in 2010.

The results are described in Smail et al. (2000) available in the Monthly Notices of the Royal Astronomical Society, June 2000. 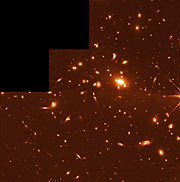 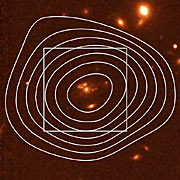 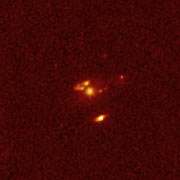