Uncovering the mysteries of Jupiter's aurora 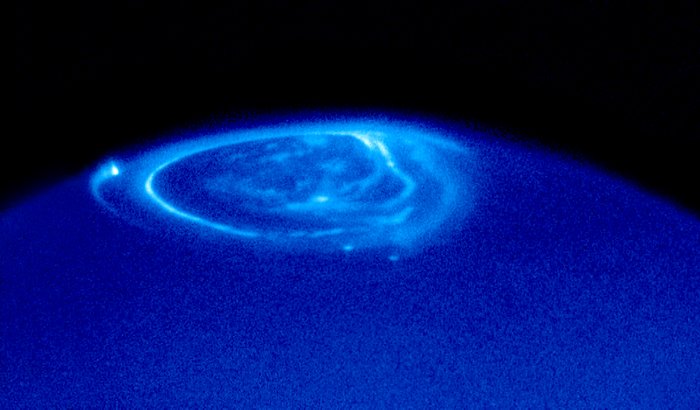 This ultraviolet image of Jupiter was taken with the Hubble Space Telescope Imaging Spectrograph (STIS) on 26 November 1998 and gives a good impression of the observations that Hubble will make in the weeks to come. The bright emissions above the dark blue background are auroral lights, similar to those seen above the Earth's polar regions. The aurorae are curtains of light resulting from high energy electrons following the planet's magnetic field into the upper atmosphere, where collisions with atmospheric atoms and molecules produce the observed light. On Jupiter one can normally see three different types of auroral emissions:

a) a main oval, centred on the magnetic north pole

c) a unique auroral feature showing the 'magnetic footprints' of three of Jupiter's satellites. These 'footprints' can be seen in this image: from Io (along the left-hand limb), from Ganymede (near the centre just below the reference oval) and from Europa (just below and to the right of Ganymede's auroral footprint). These emissions are unlike anything seen on Earth and are produced by electric currents generated at the satellites that then flow along Jupiter's magnetic field, weaving in and out of its upper atmosphere.