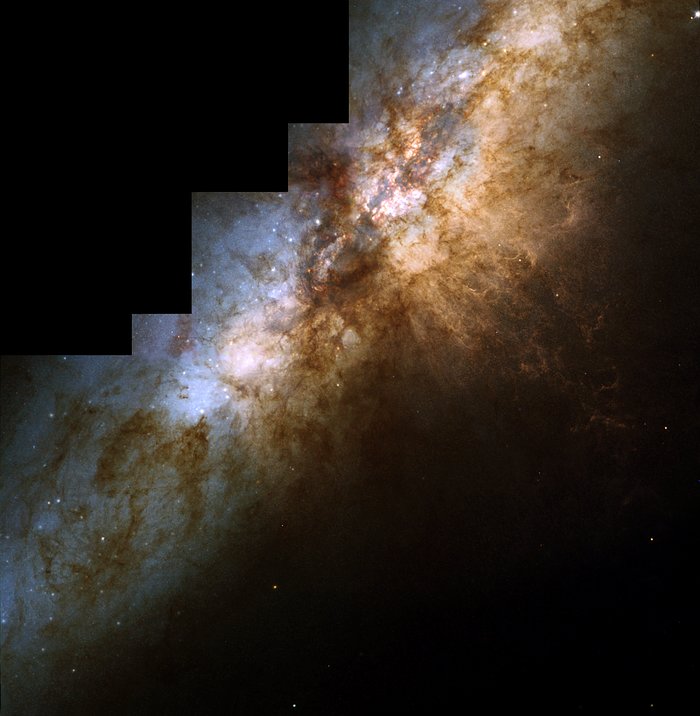 This stunningly beautiful image taken with the NASA/ESA Hubble Space Telescope shows the heart of the prototypical starburst galaxy M82. The ongoing violent star formation due to an ancient encounter with its large galactic neighbour, M81, gives this galaxy its disturbed appearance. In the image, taken by Hubble's Wide Field and Planetary Camera 2, the huge lanes of dust that crisscross M82's disk are another telltale sign of the flurry of star formation. Below the centre and to the right, a strong galactic wind is spewing knotty filaments of hydrogen and nitrogen gas. More than 100 super star clusters - very bright, compact groupings of about 100, 000 stars - are seen in this detailed Hubble picture as white dots sprinkled throughout M82's central region. The dark region just above the centre of the picture is a huge dust cloud. A collaboration of European and American scientists used these clusters to date the ancient interaction between M82 and M81. About 600 million years ago, a region called 'M82 B' (the bright area just below and to the left of the central dust cloud) exploded with new stars. Scientists have discovered that this ancient starburst was triggered by the violent encounter with M81. M82 is a bright (eighth magnitude), nearby (12 million light-years from Earth) galaxy in the constellation Ursa Major (the Great Bear). The Hubble picture was taken on September 15, 1997. The natural-colour composite was constructed from three Wide Field and Planetary Camera 2 exposures, which were combined in chromatic order: 4, 250 seconds through a blue filter (428 nm); 2, 800 seconds through a green filter (520 nm); and 2, 200 seconds through a red (820 nm) filter. This image is issued jointly by NASA and ESA.