Beautiful, detailed Hubble images of the centre of the prototypical starburst galaxy M82 point to a violent past. An ancient burst of star formation that gave birth to more than 100 super star clusters is linked to a violent encounter with the galaxy's large neighbour, M81.

Studying galactic interactions is like sifting through the forensic evidence at a crime scene. Astronomers wade through the debris of a violent encounter, collecting clues so they can reconstruct the celestial crime to determine when it happened.

Take the case of M82, a small, nearby galaxy that long ago bumped into its larger neighbour, M81. When did this violent encounter occur? New infrared and visible-light pictures from NASA & ESA's Hubble Space Telescope reveal for the first time important details of large clusters of stars which arose from the interaction.

Hubble's sharp eye spied more than 100 young, bright, compact star clusters, known as 'super star clusters', in M82's central region. Each cluster contains about 100,000 stars. These stars act like clocks: Their ages tell astronomers when the wreck occurred. Sampling clusters of stars in an older, 'fossil starburst' region, astronomers concluded that the galactic conflict between M82 and M81 began some 600 million years ago and lasted about 100 million years. The results are published in the February 2001 issue of the Astronomical Journal.

This discovery provides evidence linking the birth of super star clusters to a violent interaction between galaxies. These clusters also provide insight into the rough-and-tumble universe of long ago, when galaxies bumped into each other more frequently.

M82 wasn't a huge star-making factory before it met up with M81.

'The last tidal encounter between M82 and M81 about 600 million years ago had a major impact on what was probably an otherwise normal, quiescent disk galaxy,' says Richard de Grijs of the Institute of Astronomy, Cambridge, UK, who is leading a team of European and American astronomers in the M82 study. 'It caused a concentrated burst of star formation in the fossil starburst region. The active starburst taking place today is probably related to debris from M82 itself that has slowly 'rained' back on the galaxy since the interaction with M81.'

But what actually are these massive super star clusters?

'It is possible that a large fraction of the star formation in starbursts takes place in such concentrated clusters,' de Grijs explains. 'And we argue that these clusters are in fact very young globular clusters [spherically shaped clusters of up to one million stars]!'

So far, astronomers have observed only very old globular clusters, typically more than 10 billion years old, in our Milky Way. Astronomers once thought that this type of cluster only formed during the early stages of galaxy evolution many billions of years ago.

'Our results support other observations, mostly made with Hubble, that the formation of globular clusters does indeed continue today,' de Grijs says. 'This is, in our opinion, one of Hubble's main contributions to astrophysics to date.'

Astronomers using ground-based telescopes have provided circumstantial evidence supporting the galactic encounter 600 million years ago. Radio observations have shown a cocoon of hydrogen enclosing the two galaxies and about a dozen smaller galaxies belonging to the M81/M82 group.

M82 is a bright (eighth magnitude), nearby (12 million light-years from Earth) galaxy in the constellation Ursa Major (the Great Bear).

videos are available from: http://www.spacetelescope.org/videos/?search=heic0103 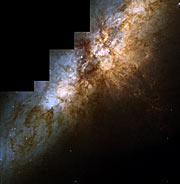 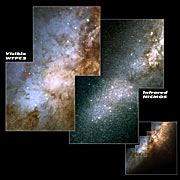 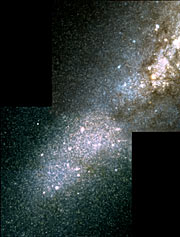 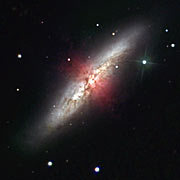 PR Video heic0103a
Ground-based overview of galacies Messier 81 and 82, zooming in on M82