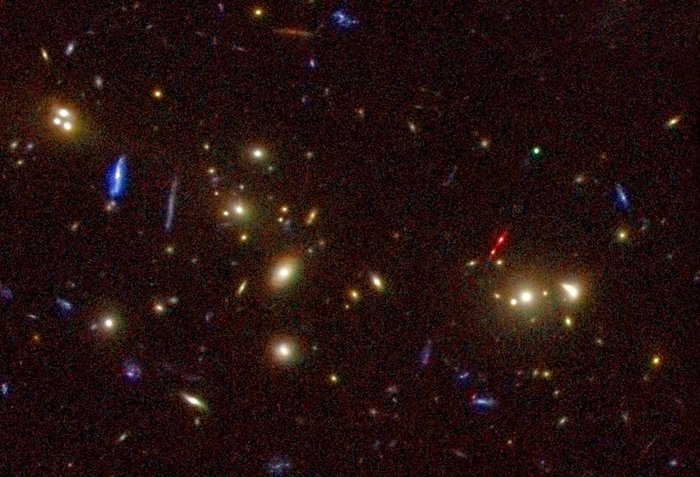 This NASA/ESA Hubble Space Telescope image of the Lynx cluster of galaxies shows the doubled image of the red Lynx Arc (just right of the centre). The puzzling arc is in reality a distant mega-cluster of stars far behind the galaxy cluster in the northern constellation of Lynx. The arc is the stretched and magnified image of 12 000 million light-year distant star-forming region. This remote source existed when the Universe was less than 2000 million years old. The discovery of this unique and tantalising object was the result of a systematic study of distant clusters of galaxies carried out with major X-ray, optical and infrared telescopes, including the Hubble Space Telescope, ROSAT and the Keck Telescopes. Bob Fosbury, of the European Space Agency's Space Telescope-European Coordinating Facility in Germany, and a team of international co-authors report the discovery in the 20 October 2003 issue of the Astrophysical Journal. The Hubble image, taken in deep red light with the Wide Field and Planetary Camera 2, has been coloured using six ground-based images from the blue to the infrared. These images were taken with the Mayall 4-m Telescope at NOAO's Kitt Peak Observatory in Arizona, USA.