Mega starbirth cluster is biggest, brightest and hottest ever seen

A mysterious arc of light found behind a distant cluster of galaxies has turned out to be the biggest, brightest and hottest star-forming region ever seen in space.

The so-called Lynx Arc is one million times brighter than the well-known Orion Nebula, a nearby prototypical 'starbirth' region visible with small telescopes. The newly identified super-cluster contains a million blue-white stars that are twice as hot as similar stars in our Milky Way galaxy. It is a rarely glimpsed example of the early days of the Universe where furious firestorms of starbirth blazed across the skies. The spectacular cluster's opulence is dimmed when seen from Earth only by the fact that it is 12 000 million light years away.

The discovery of this unique and tantalising object was the result of a systematic study of distant clusters of galaxies carried out with major X-ray, optical and infrared telescopes, including the NASA/ESA Hubble Space Telescope, ROSAT and the Keck Telescopes. Bob Fosbury, of the European Space Agency's Space Telescope-European Coordinating Facility in Germany, and a team of international co-authors report the discovery in the 20 October 2003 issue of the Astrophysical Journal.

The mega-cluster of stars appears as a puzzling red arc behind a distant galaxy cluster 5400 million light-years away in the northern constellation of Lynx. The arc is the stretched and magnified image of a mysterious celestial object about 12 000 million light-years away (at a redshift of 3.36), far beyond the cluster of galaxies. This means that the remote source existed when the Universe was less than 2000 million years old.

Fosbury and colleagues first tried to identify the arc by analysing the light from the object, but the team was not able to recognise the pattern of colours in the spectral signature of the remote object. While looking for matches with the colour spectrum, Fosbury realised that the light was related to that of the nearby Orion Nebula, a star-forming region in our own Milky Way. However where the Orion Nebula is powered by only four hot and bright blue stars, the Lynx Arc must contain around a million such stars!

Furthermore, the spectrum shows that the stars in the Lynx Arc are more than twice as hot as the Orion Nebula's central stars, with surface temperatures up to 80 000°C. Though there are much bigger and brighter star-forming regions than the Orion Nebula in our local Universe, none are as bright as the Lynx Arc, nor do they contain such large numbers of hot stars.

Even the most massive, normal nearby stars are no hotter than around 40 000°C. However, stars forming from the original, pristine gas in the early Universe can be more massive and consequently much hotter - perhaps up to 120 000°C. The earliest stars may have been as much as several hundred solar masses, but the chemical make-up of the Universe today prevents stars from forming beyond about 100 solar masses. Such 'primordial' super-hot stars are thought to be the first luminous objects to condense after the Big Bang cooled. Astronomers believe that these first 'monster' stars formed considerably earlier than the Lynx Arc - up to 1800 million years earlier. "This remarkable object is the closest we have come so far to seeing what such primordial objects might look like when our telescopes become powerful enough to see them," says Fosbury. The desire to find and study the first luminous objects in the Universe is the main scientific drive behind the construction of the NASA/ESA/CSA James Webb Space Telescope, scheduled for launch in 2011.

For broadcasters, animations of the discovery, interviews and general Hubble Space Telescope background footage are available from the ESA Television Service, see http://television.esa.int, and from https://www.spacetelescope.org/videos/?search=heic0312 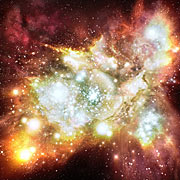 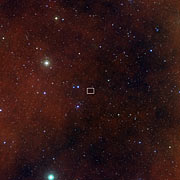 PR Video heic0312m
Interview with Bob Fosbury, "A unique object as they only live for a blink of eye"