A tale of two record-breaking clusters 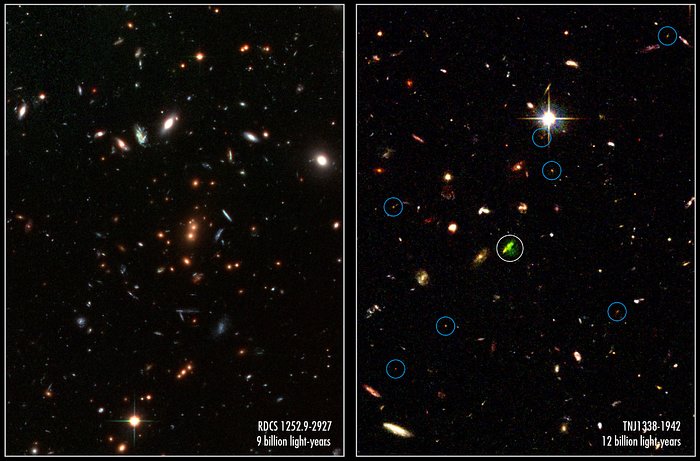 Looking back in time to when the universe was in its formative youth, the Advanced Camera for Surveys (ACS) aboard the NASA/ESA Hubble Space Telescope captured these revealing images of two galaxy clusters.

The image at left, which is made with an additional infrared exposure taken with the European Southern Observatory's Very Large Telescope, shows mature galaxies in a massive cluster that existed when the cosmos was 5 billion years old. The cluster, called RDCS1252.9-2927, is as massive as 200 trillion suns and is the most massive known cluster for its epoch. The image reveals the core of the cluster and is part of a much larger mosaic of the entire cluster. Dominating the core are a pair of large, reddish elliptical galaxies [near centre of image]. Their red colour indicates an older population of stars. Most of the stars are at least 1 billion years old. The two galaxies appear to be interacting and may eventually merge to form a larger galaxy that is comparable to the brightest galaxies seen in present-day clusters.

The red galaxies surrounding the central pair are also cluster members. The cluster probably contains many thousands of galaxies, but only about 50 can be seen in this image. The full mosaic (heic0313d) reveals several hundred cluster members. Many of the other galaxies in the image, including several of the blue galaxies, are foreground or background galaxies. The colour-composite image was assembled from two observations (through i and z filters) taken between May and June 2002 by the ACS Wide Field Camera, and one image with the ISAAC instrument on the VLT taken in 2002 (combined from a J filter exposure and a K filter exposure).

In the image at right, astronomers are seeing an embryonic cluster as it was when the universe was 1.5 billion years old. The young system, called TNJ1338-1942, is the most distant known developing cluster, or proto-cluster. It is dominated by a massive "baby galaxy" - the green object in the centre with the blue circle around it. The galaxy is producing powerful radio emissions, and is the brightest galaxy in the proto-cluster. The green colour indicates that the galaxy is emitting glowing hydrogen gas. Its clumpy appearance suggests that it is still in the process of forming. Smaller developing galaxies, marked by the blue circles, are scattered around the massive galaxy. The galaxy on the left of the massive galaxy is a foreground galaxy. The bright object in the upper half of the image is a foreground star.

This colour-composite image was assembled from observations taken between July 8 and 12, 2002 by the ACS Wide Field Camera.

Notes: The left image is a composite of VLT and HST data, while the right image is purely HST observations.