Studies of two distant galaxy clusters using a combination of the largest radio, optical and x-ray telescopes on the ground and in space have independently found that galaxies formed relatively early in the history of the Universe. The two galaxy clusters studied are respectively the most distant proto-cluster ever found and the most massive known galaxy cluster for its epoch.

Looking back in time nearly 9000 million years, an international team of astronomers found mature galaxies in a young Universe. The galaxies are members of a cluster of galaxies that existed when the Universe was only 5000 million years old, or about 35 percent of its present age. This is compelling evidence that galaxies must have started forming just after the Big Bang and is bolstered by observations made by the same team of astronomers when they peered even farther back in time. The team found embryonic galaxies a mere 1500 million years after the birth of the cosmos, or 10 percent of the Universe's present age. The 'baby galaxies' reside in a still developing cluster, the most distant proto-cluster ever found.

The Advanced Camera for Surveys (ACS) aboard the NASA/ESA Hubble Space Telescope was used to make the observations of the massive cluster, RDCS1252.9-2927, and the proto-cluster, TNJ1338-1942. Observations by NASA's Chandra X-ray Observatory yielded the mass and heavy element content of RDCS1252.9-2927, the most massive known cluster for that epoch. These observations are part of a co-ordinated effort by the ACS science team to track the formation and evolution of clusters of galaxies over a broad span of cosmic time. The ACS was specially built for such studies of very distant objects.

These findings support the theory that galaxies formed relatively early in the history of the cosmos. The existence of such massive clusters in the early Universe agrees with a cosmological model wherein clusters form by the merger of many sub-clusters in a Universe dominated by cold dark matter. The precise nature of cold dark matter, however, is still not known.

The first Hubble study estimated that the galaxies in RCDS1252 formed the bulk of their stars more than 11 000 million years ago (redshifts greater than 3). The results were published in the 20 October, 2003, issue of the Astrophysical Journal. The paper's lead author is John Blakeslee of the Johns Hopkins University in Baltimore, USA.

The second Hubble study uncovered, for the first time, a proto-cluster of 'infant galaxies' that existed more than 12 000 million years ago (redshift 4.1). These galaxies are so young that astronomers can still see a flurry of stars forming within them. The galaxies are grouped around one large galaxy. These results will be published in the January 1, 2004 issue of Nature. The paper's lead author is George Miley of Leiden Observatory in the Netherlands.

'Until recently people didn't think that clusters existed when the Universe was only about 5000 million years old,' Blakeslee explained.

'Even if there were such clusters,' Miley added, 'until recently astronomers thought it was almost impossible to find clusters that existed 8000 million years ago. In fact, no one really knew when clustering began. Now we can witness it.'

Both studies led the astronomers to conclude that these systems are the progenitors of the galaxy clusters seen today. 'The cluster RDCS1252 looks like a present-day cluster,' said Marc Postman of the Space Telescope Science Institute in Baltimore, USA, and co-author of both research papers. 'In fact, if you were to put it next to a present-day cluster you wouldn't know which is which.'

'A tale of two clusters'
How can galaxies grow so fast after the Big Bang? 'It is a case of the rich getting richer,' Blakeslee said. 'These clusters grew quickly because they are located in very dense regions, so there is enough material to build up the member galaxies very fast.'

This idea is bolstered by X-ray observations of the massive cluster RDCS1252. Chandra and the European Space Agency's XMM-Newton provided astronomers with the most accurate measurements to date of the properties of an enormous cloud of hot gas that pervades the massive cluster. This 70 million °C gas is a reservoir of most of the heavy elements in the cluster, and an accurate tracer of its total mass. A paper by Piero Rosati of the European Southern Observatory (ESO) and colleagues that presents the X-ray observations of RDCS1252 will be published in January 2004 in the Astronomical Journal.

'Chandra's sharp vision resolved the shape of the hot gas halo and showed that RDCS1252 is very mature for its age,' said Rosati, who discovered the cluster with the ROSAT X-ray telescope.

RDCS1252 may contain many thousands of galaxies. Most of those galaxies, however, are too faint to detect, although the powerful 'eyes' of the ACS pinpointed several hundred of them. Observations using ESO's Very Large Telescope (VLT) provided a precise measurement of the distance to the cluster. The ACS enabled the researchers to determine the shapes and the colours of the 100 galaxies accurately, providing information on the ages of the stars residing in them. The ACS team estimated that most of the stars in the cluster were already formed by the time the Universe was about 2000 million years old. In addition X-ray observations showed that 5 000 million years after the Big Bang the surrounding hot gas had been enriched with heavy elements from these stars and swept away from the galaxies.

If most of the galaxies in RDCS1252 have reached maturity and are settling into a quiet adulthood, the galaxies forming in the distant proto-cluster are in their energetic, unruly youth.

The proto-cluster TN J1338 contains a massive embryonic galaxy surrounded by smaller developing galaxies, which look like dots in the Hubble image. The dominant galaxy is producing spectacular radio-emitting jets, fuelled by a supermassive black hole deep within the galaxy's nucleus. Interaction between these jets and the gas can stimulate a torrent of star birth.

The discovery of the energetic radio galaxy by radio telescopes prompted astronomers to hunt for the smaller galaxies that make up the bulk of the cluster.

'Massive clusters are the cities of the Universe, and the radio galaxies within them are the smokestacks we can use for finding them when they are just beginning to form,' Miley said.

The two findings underscore the power of combining observations from many different telescopes to provide views of the distant Universe over a range of wavelengths. Hubble's advanced camera provided critical information on the structure of both distant galaxy clusters. Chandra's and XMM-Newton's X-ray vision furnished the essential measurements of the primordial gas in which the galaxies in RDCS1252 are embedded, and accurate estimates of the total mass contained within that cluster. Large ground-based telescopes, like the VLT, provided precise measurements of the distance of both clusters as well as the chemical composition of the galaxies in them.

The ACS team is conducting further observations of distant clusters to solidify our understanding of how these young clusters and their galaxies evolve into the shape of things seen today. Their planned observations include using near-infrared observations to analyse the star-formation rates in some of their clusters, including RDCS1252, in order to measure the cosmic history of star formation in these massive structures. The team is also searching the regions around several ultra-distant radio galaxies for additional examples of proto-clusters. The team's ultimate scientific goal is to establish a complete picture of cluster evolution beginning with their formation at the earliest epochs and detailing their evolution up to the present time.

For broadcasters, animations of the discovery and general Hubble Space Telescope background footage are available from https://www.spacetelescope.org/videos/?search=heic0313 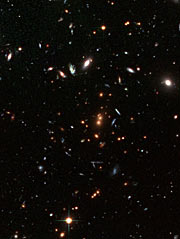 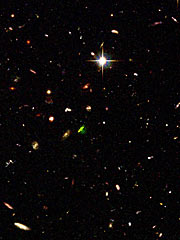 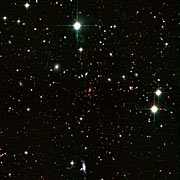