Out of this whirl: The Whirlpool Galaxy (M51) and companion galaxy 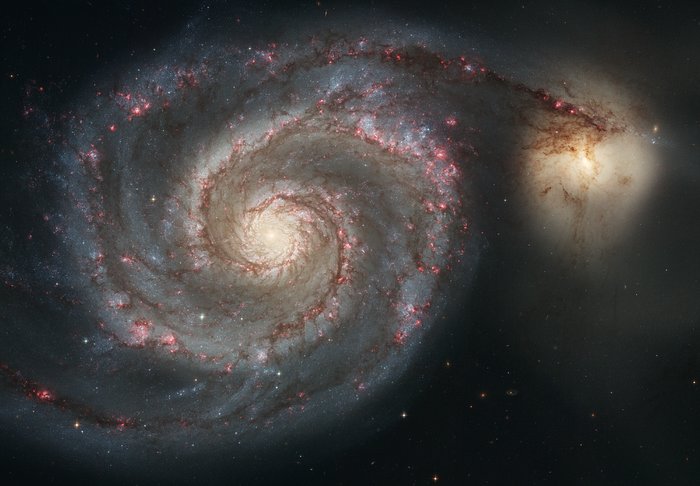 The graceful, winding arms of the majestic spiral galaxy M51 (NGC 5194) appear like a grand spiral staircase sweeping through space. They are actually long lanes of stars and gas laced with dust.

This sharpest-ever image, taken in January 2005 with the Advanced Camera for Surveys aboard the NASA/ESA Hubble Space Telescope, illustrates a spiral galaxy's grand design, from its curving spiral arms, where young stars reside, to its yellowish central core, a home of older stars. The galaxy is nicknamed the Whirlpool because of its swirling structure.

The Whirlpool's most striking feature is its two curving arms, a hallmark of so-called grand-design spiral galaxies. Many spiral galaxies possess numerous, loosely shaped arms that make their spiral structure less pronounced. These arms serve an important purpose in spiral galaxies. They are star-formation factories, compressing hydrogen gas and creating clusters of new stars. In the Whirlpool, the assembly line begins with the dark clouds of gas on the inner edge, then moves to bright pink star-forming regions, and ends with the brilliant blue star clusters along the outer edge.

Some astronomers believe that the Whirlpool's arms are so prominent because of the effects of a close encounter with NGC 5195, the small, yellowish galaxy at the outermost tip of one of the Whirlpool's arms. At first glance, the compact galaxy appears to be tugging on the arm. Hubble's clear view, however, shows that NGC 5195 is passing behind the Whirlpool. The small galaxy has been gliding past the Whirlpool for hundreds of millions of years.

As NGC 5195 drifts by, its gravitational muscle pumps up waves within the Whirlpool's pancake-shaped disk. The waves are like ripples in a pond generated when a rock is thrown in the water. When the waves pass through orbiting gas clouds within the disk, they squeeze the gaseous material along each arm's inner edge. The dark dusty material looks like gathering storm clouds. These dense clouds collapse, creating a wake of star birth, as seen in the bright pink star-forming regions. The largest stars eventually sweep away the dusty cocoons with a torrent of radiation, hurricane-like stellar winds, and shock waves from supernova blasts. Bright blue star clusters emerge from the mayhem, illuminating the Whirlpool's arms like city streetlights.

The Whirlpool is one of astronomy's galactic darlings. Located approximately 25 million light-years away in the constellation Canes Venatici (the Hunting Dogs), the Whirlpool's beautiful face-on view and closeness to Earth allow astronomers to study a classic spiral galaxy's structure and star-forming processes.