During the 15 years that the NASA/ESA Hubble Space Telescope has orbited the Earth, it has taken three-quarters of a million photos of the cosmos - images that have awed, astounded and even confounded astronomers and the public alike. Today NASA and ESA released new views of two of the most well-known images Hubble has ever taken: the Eagle Nebula, and spiral galaxy M51, known as the Whirlpool Galaxy.

The new images released today are among the largest and sharpest views Hubble has ever taken, were made with Hubble's Advanced Camera for Surveys (ACS). The two new images are so incredibly sharp they could be enlarged to billboard size and still retain all of their stunning details.

For Hubble's 15th anniversary, scientists used the newer ACS camera to revisit one region of the eerie-looking Eagle Nebula, producing a new image with stunning detail. The new Eagle Nebula image reveals a tall, dense tower of gas being sculpted by ultraviolet light from a group of massive, hot stars. The new Whirlpool Galaxy image showcases the spiral galaxy's classic features, from its curving arms, where newborn stars reside, to its yellowish central core that serves as home for older stars.

NASA's Space Shuttle Discovery launched Hubble into space on 24 April 1990 and placed it into orbit a day after, thereby opening a brand new era in astronomy. For the first time ever, a large telescope that viewed in visible light orbited above Earth's distorting atmosphere, which blurs starlight making images appear fuzzy. After installation of a new camera and a device that compensated for an improperly ground mirror, images of planets, stars, galaxies, and nebula began pouring in - all up to 10 times sharper than any previous telescope had ever delivered.

Scientists using Hubble have compiled a long list of scientific achievements since its launch 15 years ago. Hubble has:

To mark the event on 24 April, the European Space Agency is presenting a series of unique activities in collaboration with partners all over Europe. These includes an exclusive, full-length DVD film (one of the most widely distributed documentary films ever), a CD of the film soundtrack, a full-colour book and additional educational material. All over Europe, there will be Hubble Day events, press events and planetarium shows about Hubble. The mural-sized celestial images of the new Eagle Nebula and Whirlpool Galaxy were unveiled Sunday at the 40 Hubble Day events in Europe, as well as at more than 100 other venues in the USA.

The videos to the right are from ESA's Anniversary movie Hubble - 15 Years of Discovery.

PR Image heic0506a
Out of this whirl: The Whirlpool Galaxy (M51) and companion galaxy

PR Image heic0506b
The Eagle has risen: stellar spire in the Eagle Nebula 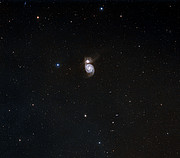 PR Image heic0506c
The Whirlpool Galaxy (M51a) with it's sparkling arms is the first galaxy found to have a spiral structure.

PR Video hst15_greek_chapter08
Greek version of the Hubble DVD 15 Years of Discovery, Chapter 8, BIRTH AND DEATH OF THE UNIVERSE

PR Video hst15_greek_chapter09_part1
Greek version of the Hubble DVD 15 Years of Discovery, Chapter 9, LOOKING TO THE END OF TIME Part 1

PR Video hst15_greek_chapter09_part2
Greek version of the Hubble DVD 15 Years of Discovery, Chapter 9, LOOKING TO THE END OF TIME Part 2

PR Video hst15_kapitel08
German version of the Hubble DVD 15 Years of Discovery, Chapter 8, BIRTH AND DEATH OF THE UNIVERSE

PR Video hst15_kapitel09_teil1
German version of the Hubble DVD 15 Years of Discovery, Chapter 9, LOOKING TO THE END OF TIME Part 1

PR Video hst15_kapitel09_teil2
German version of the Hubble DVD 15 Years of Discovery, Chapter 9, LOOKING TO THE END OF TIME Part 2

PR Video hst15_sharp_unsharp
This comparison image of the core of the galaxy M100 shows the dramatic improvement in Hubble Space Telescope's view of the universe.

PR Print Layout heic0506a
Out of this whirl: The Whirlpool Galaxy (M51) and companion galaxy