Hubble's black and white view of the Universe 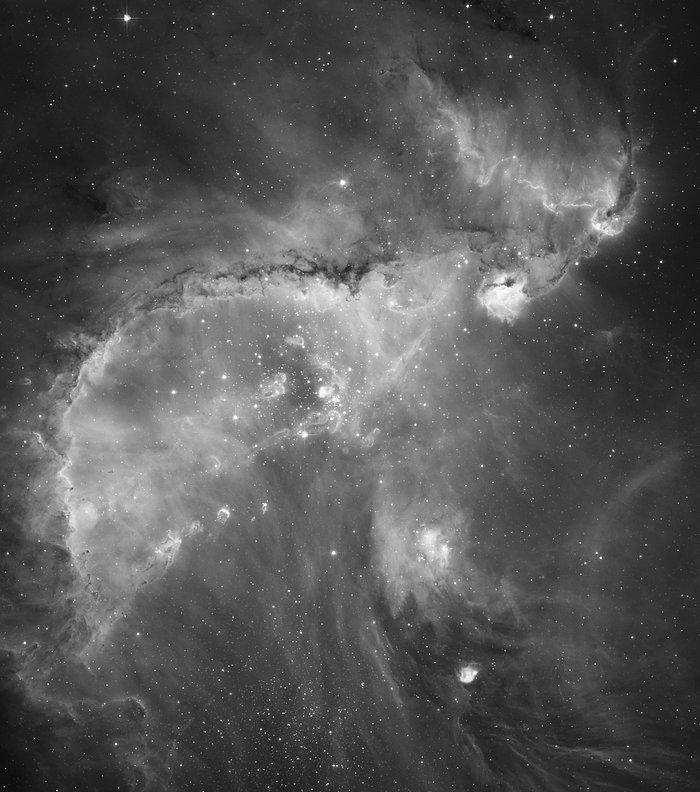 Contained within the most massive and active star-forming region in the nearby galaxy, the Small Magellanic Cloud, star cluster NGC 346 delivers energetic radiation that excites nearby gas, causing it to glow. The result is one of the most dynamic and intricately detailed images of a nearby star-forming region that has ever been taken with NASA/ESA Hubble Space Telescope.

The complexity of the gas and dust that surrounds NGC 346 shows a series of arched, ragged filaments and a distinct ridge created when high-energy radiation from the young, hot stars eats into the denser areas of the nearby interstellar medium. The intricate, dark beaded edge of the ridge, seen from Hubble's perspective in silhouette, contains several small dust globules that point back towards the central cluster.

Energetic outflows and radiation from hot young stars are eroding the dense outer portions of the star-forming region, formally known as N66, exposing new stellar nurseries. The diffuse natal parts of the nebula block the energetic outflows from streaming away from the cluster, leaving a series of filaments marking the path of the outflows.

This image of NGC 346 and its surrounding star formation was taken with Hubble's Advanced Camera for Surveys using a filter which isolates light emitted by hydrogen gas. Individual images from Hubble's cameras retain no colour information as such, other than the colour of a filter, which selects a range of wavelengths from the full spectrum of light. A black and white (monochrome) image most realistically represents the range of brightness in such a single image. Colour images may be reconstructed by combining several images made through different filters and assigning a distinct colour to each image. Even without the added colour dimension, the wide range of grey tones in the black and white image reveals a great deal of the nebula's finely detailed structure.