This Hubble Space Telescope view shows one of the most dynamic and intricately detailed star-forming regions in space, located 210,000 light-years away in the Small Magellanic Cloud (SMC), a satellite galaxy of our Milky Way. At the centre of the region is a brilliant star cluster called NGC 346. A dramatic structure of arched, ragged filaments with a distinct ridge surrounds the cluster.

A torrent of radiation from the hot stars in the cluster NGC 346, at the centre of this Hubble image, eats into denser areas around it, creating a fantasy sculpture of dust and gas. The dark, intricately beaded edge of the ridge, seen in silhouette, is particularly dramatic. It contains several small dust globules that point back towards the central cluster, like windsocks caught in a gale.

Energetic outflows and radiation from hot young stars are eroding the dense outer portions of the star-forming region, formally known as N66, exposing new stellar nurseries. The diffuse fringes of the nebula prevent the energetic outflows from streaming directly away from the cluster, leaving instead a trail of filaments marking the swirling path of the outflows.

The NGC 346 cluster is resolved into at least three sub-clusters and collectively contains dozens of hot, blue, high-mass stars, more than half of the known high-mass stars in the entire SMC galaxy. A myriad of smaller, compact clusters is also visible throughout the region.

Some of these mini-clusters appear to be embedded in dust and nebulosity, and are sites of recent or ongoing star formation. Much of the starlight from these clusters is reddened by local dust concentrations that are the remnants of the original molecular cloud that collapsed to form N66.

An international team of astronomers, led by Dr. Antonella Nota of the European Space Agency and the Space Telescope Science Institute in USA, has been studying the Hubble data. In an upcoming issue of Astrophysical Journal Letters the team reports the discovery of a rich population of infant stars scattered around the young cluster NGC 346. These stars are likely to have formed 3 to 5 million years ago, together with the other stars in the NGC 346 cluster. These infant stars are particularly interesting as they have not yet contracted to the point where their interiors are hot enough to convert hydrogen to helium.

The Small and Large Magellanic Clouds are diffuse irregular galaxies visible to the naked eye in the southern hemisphere. They are two smallish satellite galaxies that orbit our own Milky Way on a long slow journey inwards towards a future union with the Milky Way. Hubble has resolved many star formation regions in both of these neighbouring galaxies that provide astronomers with laboratories other than our own Milky Way Galaxy to study how young stars interact with and shape their environments. The two satellites are named after the Portuguese seafarer Ferdinand Magellan (1480-1521) who sailed from Europe to Asia and is best known as the first person to lead an expedition to circumnavigate the globe.

This image of NGC 346 and its surrounding star formation region was taken with Hubble's Advanced Camera for Surveys. Two broadband filters that contribute starlight from visible and near-infrared wavelengths (shown in blue and green, respectively) have been combined with light from the nebulosity that has passed though a narrow-band hydrogen-alpha filter (shown in red). 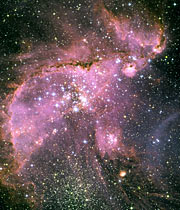 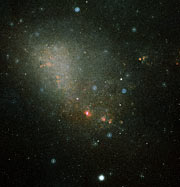