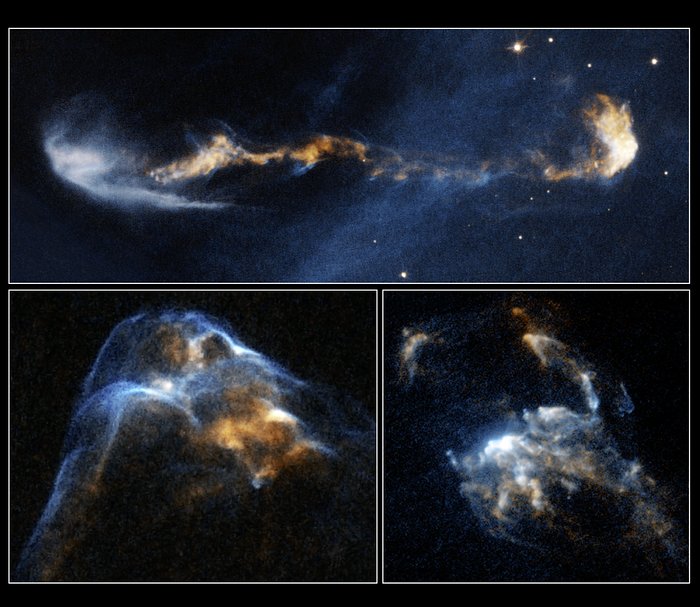 The glowing, clumpy streams of material shown in these NASA/ESA Hubble Space Telescope images are the signposts of star birth.

Ejected episodically by young stars like cannon salvos, the blobby material zips along at more than 700 000 kilometres per hour. The speedy jets are confined to narrow beams by the powerful stellar magnetic field. Called Herbig-Haro or HH objects, these outflows have a bumpy ride through space.

When fast-moving blobs collide with slower-moving gas, bow shocks arise as the material heats up. Bow shocks are glowing waves of material similar to waves produced by the bow of a ship ploughing through water.

In HH 2, at lower right, several bow shocks can be seen where several fast-moving clumps have bunched up like cars in a traffic jam. In HH 34, at lower left, a grouping of merged bow shocks reveals regions that brighten and fade over time as the heated material cools where the shocks intersect.

In HH 47, at top, the blobs of material look like a string of cars on a crowded motorway, which ends in a chain-reaction accident. The smash up creates the bow shock, left.

The outflows are roughly 1350 light-years from Earth. HH 34 and HH 2 reside near the Orion Nebula, in the northern sky. HH 47 is located in the southern constellation of Vela.