Astronomers have combined two decades of Hubble observations to make unprecedented movies revealing never-before-seen details of the birth pangs of new stars. This sheds new light on how stars like the Sun form.

Stars aren’t shy about sending out birth announcements. They fire off energetic jets of glowing gas travelling at supersonic speeds in opposite directions through space.

Although astronomers have looked at still pictures of stellar jets for decades, now they can watch movies, thanks to the NASA/ESA Hubble Space Telescope.

An international team of scientists led by astronomer Patrick Hartigan of Rice University in Houston, USA, has collected enough high-resolution Hubble images over a 14-year period to stitch together time-lapse movies of young jets ejected from three stars.

The moving pictures offer a unique view of stellar phenomena that move and change over just a few years. Most astronomical processes change over timescales that are much longer than a human lifetime.

The movies reveal the motion of the speedy outflows as they tear through the interstellar environments. Never-before-seen details in the jets’ structure include knots of gas brightening and dimming and collisions between fast-moving and slow-moving material, creating glowing arrowhead features. These phenomena are providing clues about the final stages of a star’s birth, offering a peek at how the Sun behaved 4.5 billion years ago.

“For the first time we can actually observe how these jets interact with their surroundings by watching these time-lapse movies,” said Hartigan. “Those interactions tell us how young stars influence the environments out of which they form. With movies like these, we can now compare observations of jets with those produced by computer simulations and laboratory experiments to see which aspects of the interactions we understand and which we don’t understand.”

Hartigan’s team’s results appear in the 20 July 2011 issue of the Astrophysical Journal.

Jets are an active, short-lived phase of star formation, lasting only about 100 000 years. They are called Herbig-Haro (HH) objects, named after George Herbig and Guillermo Haro, who studied the outflows in the 1950s. Astronomers still don’t know what role jets play in the star formation process or exactly how the star unleashes them.

A star forms from a collapsing cloud of cold hydrogen gas. As the star grows, it gravitationally attracts more matter, creating a large spinning disc of gas and dust around it. Eventually, planets may arise within the disc as dust clumps together.

The disc material gradually spirals onto the star and escapes as high velocity jets along the star’s axis of spin. The speedy jets may initially be confined to narrow beams by the star’s powerful magnetic field. The jet phase stops when the disc runs out of material, usually a few million years after the star’s birth.

All of the outflows are roughly 1350 light-years from Earth. HH 34, HH 1, and HH 2 reside near the Orion Nebula, in the northern sky. HH 46 and HH 47 are in the southern constellation of Vela (The Sails).

Computer software has woven together these observations, taken over many years, and generated movies that show continuous motion. The movies support previous observations which revealed that the twin jets are not ejected in a steady stream, like water flowing from a garden hose. Instead, they are launched sporadically in clumps. The beaded-jet structure might be like a “ticker tape”, recording episodes when material fell onto the star.

The movies show that the clumpy gas in the jets is moving at different speeds like traffic on a motorway. When fast-moving blobs collide with gas in the slow lane, bow shocks arise as the material heats up. Bow shocks are glowing waves of material similar to waves produced by the bow of a ship ploughing through water. In HH 2, for example, several bow shocks can be seen where several fast-moving clumps have bunched up like cars in a traffic jam. In another jet, HH 34, a grouping of merged bow shocks reveals regions that brighten and fade over time as the heated material cools where the shocks intersect.

In other areas of the jets, bow shocks form from encounters with the surrounding dense gas cloud. In HH 1 a bow shock appears at the top of the jet as it grazes the edge of a dense gas cloud. New glowing knots of material also appear. These knots may represent gas from the cloud being swept up by the jet, just as a swift-flowing river pulls along mud from the shoreline.

The movies also provide evidence that the inherent clumpy nature of the jets begins near the newborn stars. In HH 34 Hartigan traced a glowing knot to within about 14 billion kilometres of the star.

“Taken together, our results paint a picture of jets as remarkably diverse objects that undergo highly structured interactions between material within the outflow and between the jet and the surrounding gas,” Hartigan explained. “This contrasts with the bulk of the existing simulations which depict jets as smooth systems.”

The details revealed by Hubble were so complex that Hartigan consulted with experts in fluid dynamics from Los Alamos National Laboratory in New Mexico, the UK Atomic Weapons Establishment, and General Atomics in San Diego, California, as well as computer specialists from the University of Rochester in New York. Motivated by the Hubble results, Hartigan’s team is now conducting laboratory experiments at the Omega Laser facility in New York to understand how supersonic jets interact with their environment.

“Our collaboration has exploited not just large laser facilities such as Omega, but also computer simulations that were developed for research into nuclear fusion,” explains Paula Rosen of the UK Atomic Weapons Establishment, a co-author of the research. “Using these experimental methods has enabled us to identify aspects of the physics that the astronomers overlooked — it is exciting to know that what we do in the laboratory here on Earth can shed light on complex phenomena in stellar jets over a thousand light-years away. In future, even larger lasers, like the National Ignition Facility at the Lawrence Livermore National Laboratory in California, will be able explore the nuclear processes that take place within stars.” 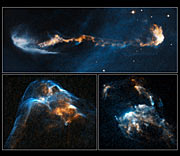 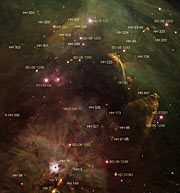