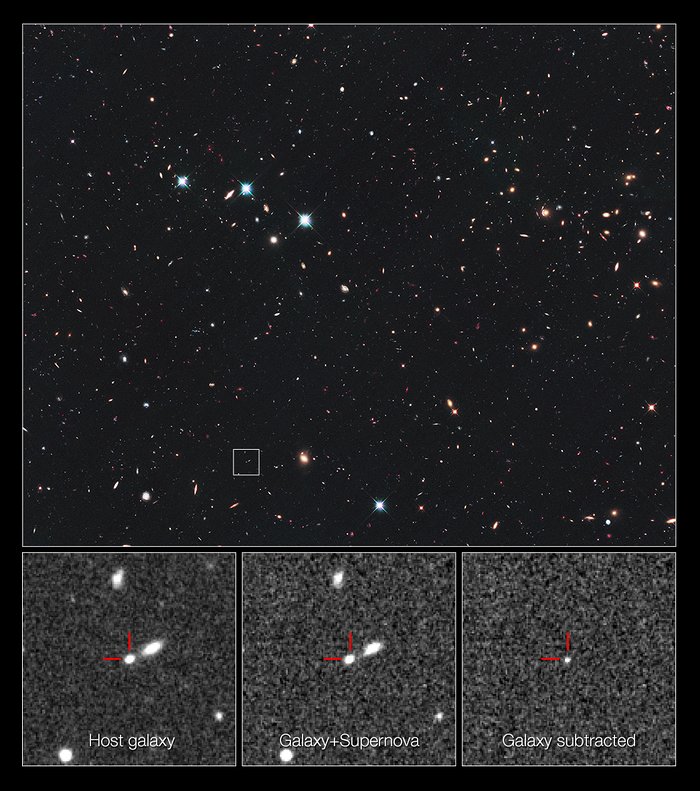 This is a NASA/ESA Hubble Space Telescope view looking long ago and far away at a supernova that exploded over 10 billion years ago — the most distant Type Ia supernova ever detected. The supernova’s light is just arriving at Earth, having travelled more than 10 billion light-years (redshift 1.914) across space.

Astronomers spotted the supernova in December 2010 in the Cosmic Assembly Near-infrared Deep Extragalactic Legacy Survey (CANDELS) field, and named it SN UDS10Wil (nicknamed SN Wilson). The small box in the top image pinpoints the supernova’s host galaxy in the CANDELS survey. The image is a blend of visible and near-infrared light, taken by Hubble’s Advanced Camera for Surveys (ACS) and Wide Field Camera 3 (WFC3). The search technique involved taking multiple near-infrared images with WFC3 spaced roughly 50 days apart over the span of three years, looking for a supernova’s faint glow.

The astronomers then used WFC3’s spectrometer and the European Southern Observatory’s Very Large Telescope to verify the supernova’s distance and to decode its light, finding the unique signature of a Type Ia supernova.