The NASA/ESA Hubble Space Telescope has broken the record in the quest to find the furthest supernova of the type used to measure cosmic distances. This supernova exploded more than 10 billion years ago (redshift 1.914), at a time the Universe was in its early formative years and stars were being born at a rapid rate.

The supernova, designated SN UDS10Wil [1], belongs to a special class of exploding stars known as Type Ia supernovae. These bright beacons are prized by astronomers because they can be used as a yardstick for measuring cosmic distances, thereby yielding clues to the nature of dark energy, the mysterious force accelerating the rate of expansion of the Universe.

“This new distance record holder opens a window into the early Universe, offering important new insights into how these supernovae form,” said astronomer David O. Jones of The Johns Hopkins University in Baltimore, Md., lead author on the science paper detailing the discovery. “At that epoch, we can test theories about how reliable these detonations are for understanding the evolution of the Universe and its expansion.”

One of the debates surrounding Type Ia supernovae is the nature of the fuse that ignites them. This latest discovery adds credence to one of two competing theories of how they explode. Although preliminary, the evidence favours the explosive merger of two burned out stars — small, dim, and dense stars known as white dwarfs, the final state for stars like our Sun.

The discovery was part of a three-year Hubble program called the CANDELS+CLASH Supernova Project, begun in 2010 [2]. This program aimed to survey faraway Type Ia supernovae to determine their distances and see if their behaviour has changed over the 13.8 billion years since the Big Bang, using the sharpness and versatility of Hubble’s Wide Field Camera 3.

The supernova team’s search technique involved taking multiple near-infrared images spaced roughly 50 days apart over the span of three years, looking for a supernova’s faint glow. After spotting SN UDS10Wil in December 2010, the CANDELS team then used the spectrometer on Hubble’s Wide Field Camera 3, along with the European Southern Observatory’s Very Large Telescope, to verify the supernova’s distance and to decode its light, hoping to find the unique signature of a Type Ia supernova.

Finding remote supernovae opens up the possibility to measure the Universe’s accelerating expansion due to dark energy [4]. However, this is an area that is not fully understood — and nor are the origins of Type Ia supernovae. “This new result is a really exciting step forward in our study of supernovae and the distant Universe,” said team member Jens Hjorth of the Dark Cosmology Centre at the Niels Bohr Institute, University of Copenhagen. “We can begin to explore and understand the stars that cause these violent explosions.”

In the single white dwarf scenario — a pathway in which a white dwarf gradually feeds off a partnering normal star and explodes when it accretes too much mass — the rate of supernovae can be relatively high in the early Universe, because some of these systems can reach the point of explosion very quickly. The steep drop-off favours the double white dwarf mechanism, because it predicts that most stars in the early Universe are too young to become Type Ia supernovae.

Knowing what triggers Type Ia supernovae will also show how quickly the Universe enriched itself with heavier elements, such as iron. These exploding stars produce about half of the iron in the Universe, the raw material for building planets, and life.

The team’s results will appear in the 10 May 2013 issue of The Astrophysical Journal.

[1] The supernova has been catalogued as SN UDS10Wil in the CANDEL-CLASH list. It has also been nicknamed SN Wilson, after the 28th U.S. president Woodrow Wilson.

[3] The previous record holder was recently announced by a team that identified a supernova that exploded around 9 billion years ago (redshift 1.7). The paper was published in The Astrophysical Journal, available here.

[4] It has been known since the late 1920s that distant galaxies appear to be moving away from us with a speed that is proportional to their distance. Edwin Hubble and Georges Lemaître were the first to infer that this implied the whole Universe is expanding. In 2011, the Nobel Prize in Physics was awarded to the teams of astronomers that discovered, using Type Ia supernovae, that this expansion is actually accelerating (ann11069) — Adam Riess of Johns Hopkins University, Saul Perlmutter of the University of California at Berkeley, and Brian Schmidt of the Australian National University in Canberra. This acceleration is attributed to dark energy, whose nature is unknown.

The research is presented in a paper entitled “The Discovery of the Most Distant Known Type Ia Supernova at Redshift 1.914”, accepted for publication in 10 May 2013 issue of The Astrophysical Journal. 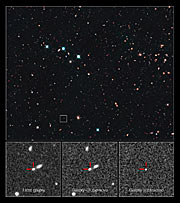 PR Image heic1306d
Record-breaking supernova in the CANDELS Ultra Deep Survey: before, after, and difference 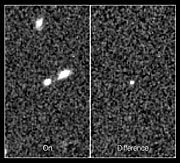