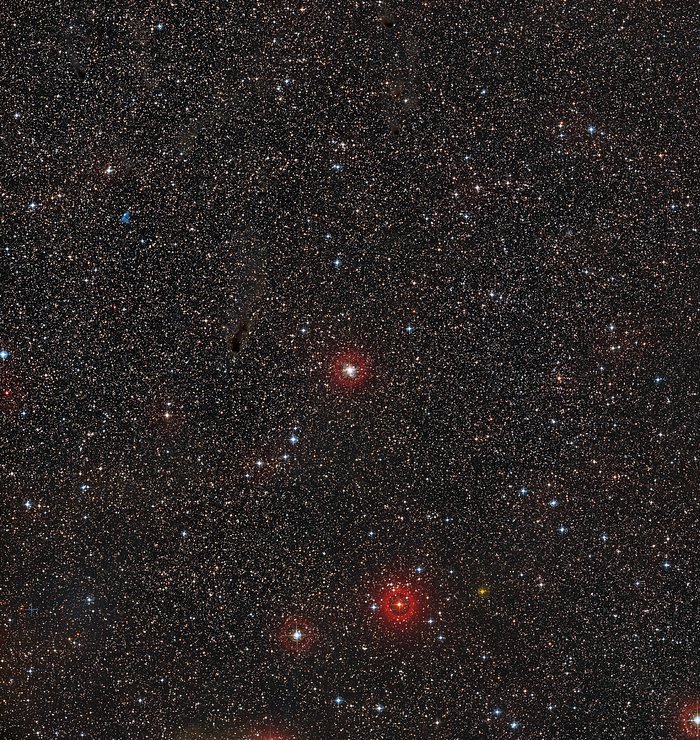 This image from the Digitized Sky Survey shows variable star RS Puppis and its surroundings. This field is rich in intriguing astronomical objects.

RS Pup is the bright star right in the centre of the frame. It is a type of variable star known as a Cepheid variable. As variable stars go, Cepheids have comparatively long periods — RS Puppis, for example, varies in brightness by almost a factor of five every 40 or so days.

RS Puppis is unusual; this variable star is shrouded by thick, dark clouds of dust enabling a phenomenon known as a light echo to be shown with stunning clarity.

Also visible towards the bottom centre of the field is another variable star known as Y Puppis. Like RS Puppis, it too is a pulsating star, although its period is a little less regular. It is part of a multiple star system over 400 light-years away from us. This star is very bright in the infrared, and is seen as a fiery red colour.

Just to the right of Y Puppis is another intriguing object known as V351 Puppis, or Nova Pup 1991, shown as the rather distinctive yellow object. This star expelled its outer layers into the surrounding space in 1991, forming nebulous shells of gas.