Spectra of planets in TRAPPIST-1 system 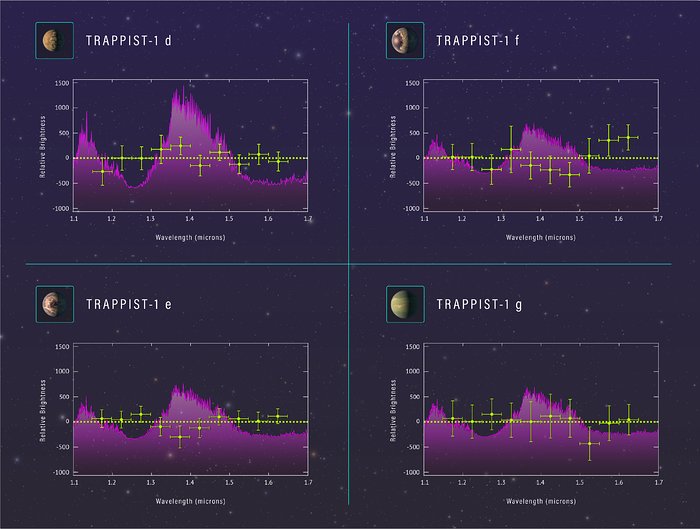 These spectra show the chemical makeup of the atmospheres of four of the Earth-sized planets orbiting within or near the habitable zone of the star TRAPPIST-1.

To obtain the spectra, astronomers used the NASA/ESA Hubble Space Telescope to collect light from TRAPPIST-1 passing through the exoplanets’ atmospheres as the exoplanets crossed in front of the star.

The purple curves show the predicted signatures of gases such as water and methane that absorb certain wavelengths of light. These gases would be found in a puffy hydrogen-dominated atmosphere similar to those of gaseous planets such as Neptune. The Hubble results, indicated by the green crosses, reveal no evidence of an extended atmosphere in three of the exoplanets (TRAPPIST-1d, f, and e). Additional observations are needed to rule out a hydrogen-dominated atmosphere for the fourth planet (TRAPPIST-1g).

The evidence indicates that the atmospheres are more compact than could be measured by the Hubble observations.