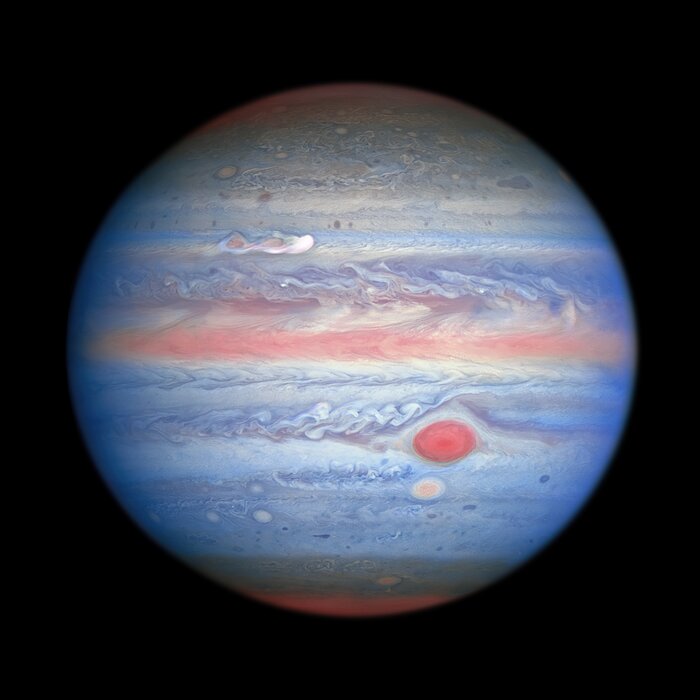 A multiwavelength observation in ultraviolet/visible/near-infrared light of Jupiter obtained by the NASA/ESA Hubble Space Telescope on 25 August 2020 is giving researchers an entirely new view of the giant planet. Hubble’s near-infrared imaging, combined with ultraviolet views, provides a unique panchromatic look that offers insights into the altitude and distribution of the planet’s haze and particles. This complements Hubble’s visible-light pictures that show the ever-changing cloud patterns.

In this photo, the parts of Jupiter’s atmosphere that are at higher altitude, especially over the poles, look red as a result of atmospheric particles absorbing ultraviolet light. Conversely, the blue-hued areas represent the ultraviolet light being reflected off the planet.

A new storm at upper left, which erupted on 18 August 2020, is grabbing the attention of scientists in this multiwavelength view. The “clumps” trailing the white plume appear to be absorbing ultraviolet light, similar to the centre of the Great Red Spot, and Red Spot Jr. directly below it. This provides researchers with more evidence that this storm may last longer on Jupiter than most storms.