This latest image of Jupiter, taken by the NASA/ESA Hubble Space Telescope on 25 August 2020, was captured when the planet was 653 million kilometres from Earth. Hubble’s sharp view is giving researchers an updated weather report on the monster planet’s turbulent atmosphere, including a remarkable new storm brewing, and a cousin of the Great Red Spot changing colour — again. The new image also features Jupiter’s icy moon Europa.

A unique and exciting detail of Hubble’s new snapshot appears at mid-northern latitudes as a bright, white, stretched-out storm moving at 560 kilometres per hour. This single plume erupted on 18 August 2020 and another has since appeared.

While it’s common for storms to pop up in this region, often several at once, this particular disturbance appears to have more structure behind it than observed in previous storms. Trailing behind the plume are small, counterclockwise dark clumps also not witnessed in the past. Researchers speculate this may be the beginning of a longer-lasting northern hemisphere spot, perhaps to rival the legendary Great Red Spot that dominates the southern hemisphere.

Hubble shows that the Great Red Spot, rolling counterclockwise in the planet’s southern hemisphere, is ploughing into the clouds ahead of it, forming a cascade of white and beige ribbons. The Great Red Spot is currently an exceptionally rich red colour, with its core and outermost band appearing deeper red.

Researchers say the Great Red Spot now measures about 15 800 kilometres across, big enough to swallow the Earth. The super-storm is still shrinking, as noted in telescopic observations dating back to 1930, but its rate of shrinkage appears to have slowed. The reason for its dwindling size is a complete mystery.

Researchers are noticing that another feature has changed: the Oval BA, nicknamed by astronomers as Red Spot Jr., which appears just below the Great Red Spot in this image. For the past few years, Red Spot Jr. has been fading in colour to its original shade of white after appearing red in 2006. However, now the core of this storm appears to be darkening to a reddish hue. This could hint that Red Spot Jr. is on its way to reverting to a colour more similar to that of its cousin.

Hubble’s image shows that Jupiter is clearing out its higher-altitude white clouds, especially along the planet’s equator, which is enveloped in an orangish hydrocarbon smog.

Jupiter’s icy moon Europa is visible to the left of the gas giant. Europa is already thought to harbour a liquid ocean beneath its icy crust, making this moon one of the main targets in the search for habitable worlds beyond Earth. In 2013 it was announced that the Hubble Space Telescope discovered water vapour erupting from the frigid surface of Europa, in one or more localised plumes near its south pole. ESA's JUpiter ICy moons Explorer, a mission planned for launch in 2022, aims to explore both Jupiter and three of its largest moons: Ganymede, Callisto, and Europa.

Hubble also captured a new multiwavelength observation in ultraviolet/visible/near-infrared light of Jupiter on 25 August 2020, which is giving researchers an entirely new view of the giant planet. Hubble’s near infrared imaging, combined with ultraviolet views, provides a unique panchromatic look that offers insights into the altitude and distribution of the planet’s haze and particles. This complements Hubble’s visible-light picture that shows the ever-changing cloud patterns. 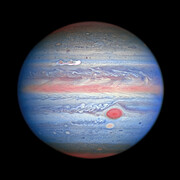