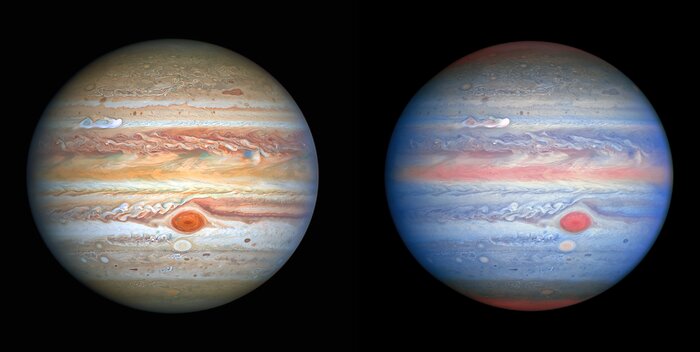 [Left] This latest visible-light image of Jupiter was taken by the Hubble Space Telescope on 25 August 2020 and was captured when the planet was 653 million kilometres from Earth. Hubble’s sharp view is giving researchers an updated weather report on the monster planet’s turbulent atmosphere, including a remarkable new storm brewing, and a cousin of the Great Red Spot changing colour — again. The new image also features Jupiter’s icy moon Europa.

[Right] This multiwavelength observation in ultraviolet/visible/near-infrared light of Jupiter was obtained by the Hubble Space Telescope on 25 August 2020 and is giving researchers an entirely new view of the giant planet. Hubble’s near-infrared imaging, combined with ultraviolet views, provides a unique panchromatic look that offers insights into the altitude and distribution of the planet’s haze and particles. This complements Hubble’s visible-light pictures that show the ever-changing cloud patterns.