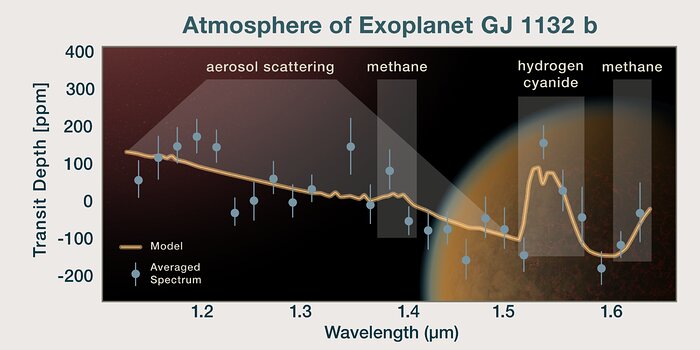 This plot shows the spectrum of the atmosphere of an Earth sized rocky exoplanet, GJ 1132 b, which is overlaid on an artist's impression of the planet.

The orange line represents the model spectrum. In comparison, the observed spectrum is shown as blue dots representing averaged data points, along with their error bars.

This analysis is consistent with GJ 1132 b being predominantly a hydrogen atmosphere with a mix of methane and hydrogen cyanide. The planet also has aerosols which cause scattering of light.

This is the first time a so-called “secondary atmosphere,” which was replenished after the planet lost its primordial atmosphere, has been detected on a world outside of our solar system.