Diagram of the Atmospheres of Uranus and Neptune 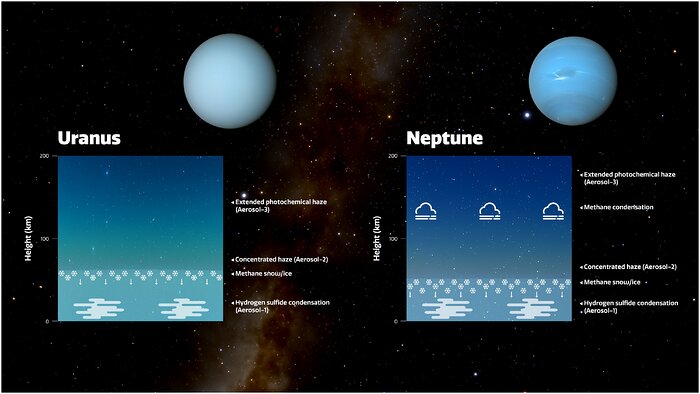 This diagram shows three layers of aerosols in the atmospheres of Uranus and Neptune, as modelled by a team of scientists. The height scale on the diagram represents the pressure above 10 bar.

The deepest layer (the Aerosol-1 layer) is thick and composed of a mixture of hydrogen sulphide ice and particles produced by the interaction of the planets’ atmospheres with sunlight.

The key layer that affects the colours is the middle layer, which is a layer of haze particles (referred to in the paper as the Aerosol-2 layer) that is thicker on Uranus than on Neptune. The team suspects that, on both planets, methane ice condenses onto the particles in this layer, pulling the particles deeper into the atmosphere in a shower of methane snow. Because Neptune has a more active, turbulent atmosphere than Uranus does, the team believes Neptune’s atmosphere is more efficient at churning up methane particles into the haze layer and producing this snow. This removes more of the haze and keeps Neptune’s haze layer thinner than it is on Uranus, meaning the blue colour of Neptune looks stronger.

Above both of these layers is an extended layer of haze (the Aerosol-3 layer) similar to the layer below it but more tenuous. On Neptune, large methane ice particles also form above this layer.