Hubble Helps Explain Why Uranus and Neptune Are Different Colours

Astronomers may now know why Uranus and Neptune are different colours. Using observations from the NASA/ESA Hubble Space Telescope, as well as the Gemini North telescope and the NASA Infrared Telescope Facility, researchers have developed a single atmospheric model that matches observations of both planets. The model reveals that excess haze on Uranus builds up in the planet’s stagnant, sluggish atmosphere and makes it appear a lighter tone than Neptune.

Neptune and Uranus have much in common — they have similar masses, sizes, and atmospheric compositions — yet their appearances are notably different. At visible wavelengths Neptune is a rich, deep azure hue whereas Uranus is a distinctly pale shade of cyan. Astronomers now have an explanation for why the two planets are different colours.

New research suggests that a layer of concentrated haze that is present on both planets is thicker on Uranus than on Neptune and therefore ‘whitens’ Uranus’s appearance more than Neptune’s [1]. If there was no haze in the atmospheres of Neptune and Uranus, both would appear almost equally blue as a result of blue light being scattered in their atmospheres [2].

This conclusion comes from a model [3] that an international team led by Patrick Irwin, Professor of Planetary Physics at Oxford University, developed to describe aerosol layers in the atmospheres of Neptune and Uranus [4]. Previous investigations of these planets’ upper atmospheres had focused on the appearance of the atmosphere at only specific wavelengths. However, this new model consists of multiple atmospheric layers and matches observations from both planets across a wide range of wavelengths. The new model also includes haze particles within deeper layers that had previously been thought to contain only clouds of methane and hydrogen sulphide ices.

“This is the first model to simultaneously fit observations of reflected sunlight from ultraviolet to near-infrared wavelengths,” explained Irwin, who is the lead author of a paper presenting this result in the Journal of Geophysical Research: Planets. “It’s also the first to explain the difference in visible colour between Uranus and Neptune.”

The team’s model consists of three layers of aerosols at different heights [5]. The key layer that affects the colours is the middle layer, which is a layer of haze particles (referred to in the paper as the Aerosol-2 layer) that is thicker on Uranus than on Neptune. The team suspects that, on both planets, methane ice condenses onto the particles in this layer, pulling the particles deeper into the atmosphere in a shower of methane snow. Because Neptune has a more active, turbulent atmosphere than Uranus does, the team believes Neptune’s atmosphere is more efficient at churning up methane particles into the haze layer and producing this snow. This removes more of the haze and keeps Neptune’s haze layer thinner than it is on Uranus, with the result that the blue colour of Neptune looks stronger.

“We hoped that developing this model would help us understand clouds and hazes in the ice giant atmospheres,” commented Mike Wong, an astronomer at the University of California, Berkeley, and a member of the team behind this result. “Explaining the difference in colour between Uranus and Neptune was an unexpected bonus!”

To create this model, Irwin’s team analysed archival data spanning several years from the NASA/ESA Hubble Space Telescope. This spectrographic data was obtained with Hubble’s Space Telescope Imaging Spectrograph (STIS), covering a broad range of wavelengths from ultraviolet through to visible and infrared (0.3–1.0 micrometres). It was complemented with data from ground-based telescopes: a set of new observations from the Gemini North telescope, and archival data from the NASA Infrared Telescope Facility, both located in Hawai‘i.

Not only did the team examine the spectra of the planets, they also made use of some of the many images Hubble has taken of the two planets with its Wide Field Camera 3 (WFC3) instrument. Hubble provides excellent views of the distinctive atmospheric storms shared by both planets known as ‘dark spots’, which astronomers have been aware of for many years. It wasn't known exactly which atmospheric layers were disturbed by dark spots to make them visible to Hubble. The model produced by the team explains what gives the spots a dark appearance, and why they are more easily detectable on Uranus compared to Neptune.

The authors thought that a darkening of the aerosols at the deepest layer of their model would produce dark spots similar to those seen on Neptune and perhaps Uranus. With the detailed images from Hubble, they could check and confirm their hypothesis. Indeed, simulated images based on that model were seen to closely match the WFC3 images of both planets, producing dark spots visible at the same wavelengths. The same thick haze in the Aerosol-2 layer on Uranus that causes its lighter blue colour is believed also to obscure these dark spots more often than on Neptune.

[1] This whitening effect is similar to how clouds in exoplanet atmospheres dull or ‘flatten’ features in the spectra of exoplanets.

[2] This process — referred to as Rayleigh scattering — is what makes the sky blue here on Earth. Rayleigh scattering occurs predominantly at shorter, bluer wavelengths; the red light scattered from the haze and air molecules is more absorbed than the blue light by methane molecules in the atmosphere of the planets. On Earth, it is nitrogen molecules in the atmosphere that scatter most of the light in this way, while on Neptune and Uranus hydrogen is the main scattering molecule.

[3] A scientific model is a computational tool used by scientists to test predictions about a phenomenon that would be impossible to test in the real world.

[4] An aerosol is a suspension of fine droplets or particles in a gas. Common examples on Earth include mist, soot, smoke, and fog. On Neptune and Uranus, particles produced by sunlight interacting with elements in the atmosphere (photochemical reactions) are responsible for aerosol hazes in these planets’ atmospheres.

[5] The deepest layer (referred to in the paper as the Aerosol-1 layer) is thick and is composed of a mixture of hydrogen sulphide ice and particles produced by the interaction of the planets’ atmospheres with sunlight. The top layer is an extended layer of haze (the Aerosol-3 layer) similar to the middle layer but more tenuous. On Neptune, large methane ice particles also form above this layer.

Gemini North is one half of the international Gemini Observatory, which is a Program of NSF's NOIRLab.

This research was presented in the paper “Hazy blue worlds: A holistic aerosol model for Uranus and Neptune, including Dark Spots” to appear in the Journal of Geophysical Research: Planets.

PR Image heic2209b
Diagram of the Atmospheres of Uranus and Neptune 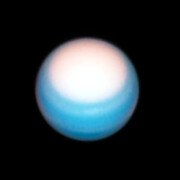 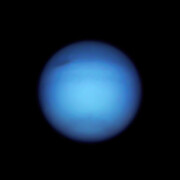