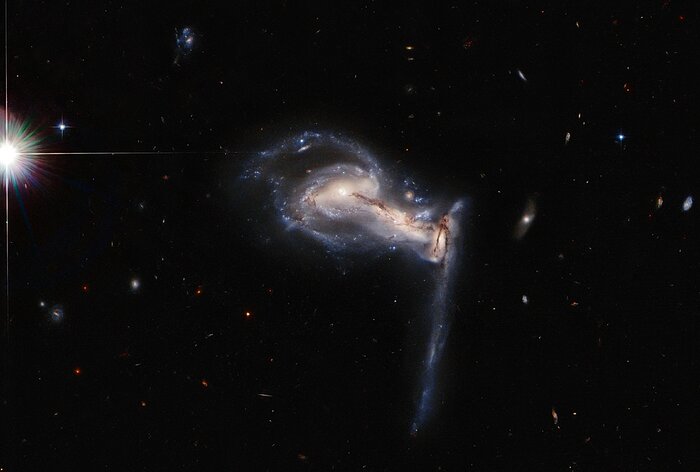 A dramatic triplet of galaxies takes centre stage in this latest Picture of the Week from the NASA/ESA Hubble Space Telescope, which captures a three-way gravitational tug-of-war between interacting galaxies. This system —known as Arp 195— is featured in the Atlas of Peculiar Galaxies, a list which showcases some of the weirder and more wonderful galaxies in the universe.

Observing time with the Hubble Space Telescope is extremely valuable, so astronomers don't want to waste a second. The schedule for Hubble observations is calculated using a computer algorithm which allows the spacecraft to occasionally gather bonus snapshots of data between longer observations. This image of the clashing triplet of galaxies in Arp 195 is one such snapshot. Extra observations such as these do more than provide spectacular images — they also help to identify promising targets to follow up with telescopes such as the upcoming NASA/ESA/CSA James Webb Space Telescope.