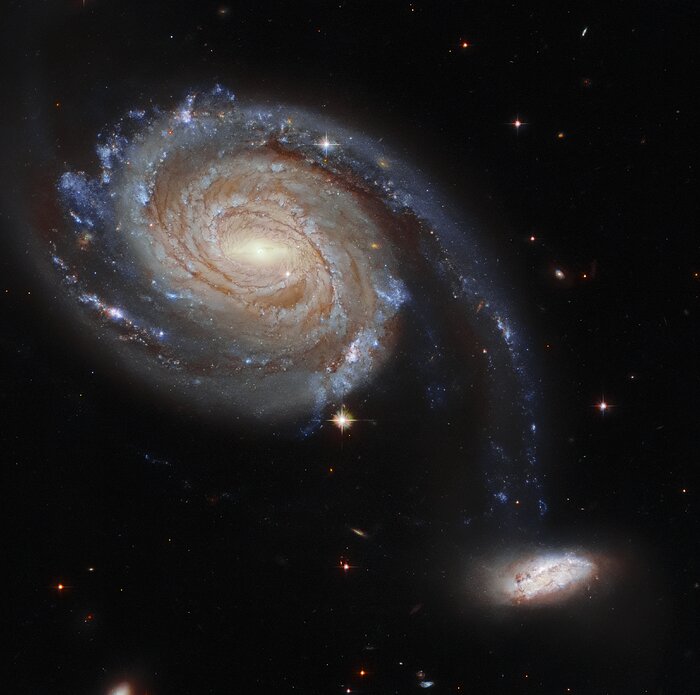 This observation from the NASA/ESA Hubble Space Telescope showcases Arp 86, a peculiar pair of interacting galaxies which lies roughly 220 million light-years from Earth in the constellation Pegasus. Arp 86 is composed of the two galaxies NGC 7752 and NGC 7753 — NGC 7753 is the large spiral galaxy dominating this image, and NGC 7752 is its smaller companion. The diminutive companion galaxy almost appears to be attached to NGC 7753, and it is this peculiarity that has earned the designation “Arp 86” — signifying that the galaxy pair appears in the Atlas of Peculiar Galaxies compiled by the astronomer Halton Arp in 1966. The gravitational squabble between the two galaxies is doomed to end catastrophically for NGC 7752. It will eventually either be flung out into intergalactic space or be entirely engulfed by its far larger neighbour.

Hubble observed Arp 86 as part of a larger effort to understand the connections between young stars and the clouds of cold gas in which they form. Hubble gazed into star clusters and clouds of gas and dust in a variety of environments dotted throughout nearby galaxies. Combined with measurements from ALMA, a gigantic radio telescope perched high in the Chilean Andes, these Hubble observations provide a treasure trove of data for astronomers working to understand how stars are born.

These observations also helped sow the seeds of future research with an upcoming space telescope, the NASA/ESA James Webb Space Telescope (JWST). This telescope, due to launch later this year, will study star formation in dusty regions such as the galaxies of Arp 86.