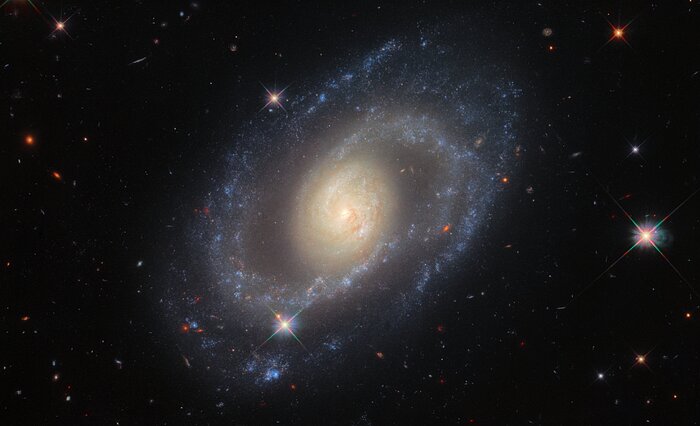 This image from the NASA/ESA Hubble Space Telescope features the spiral galaxy Mrk 1337, which is roughly 120 million light-years away from Earth in the constellation Virgo. Hubble’s Wide Field Camera 3 snapped Mrk 1337 at a wide range of ultraviolet, visible and infrared wavelengths, producing this richly detailed image. Mrk 1337 is a weakly barred spiral galaxy, which as the name suggests means that the spiral arms radiate from a central bar of gas and stars. Bars occur in roughly half of spiral galaxies, including our own galaxy the Milky Way.

These observations are part of a campaign to improve our knowledge of how fast the universe is expanding. They were proposed by Adam Riess, who was awarded a Nobel Laureate in physics 2011 for his contributions to the discovery of the accelerating expansion of the Universe, alongside Saul Perlmutter and Brian Schmidt.