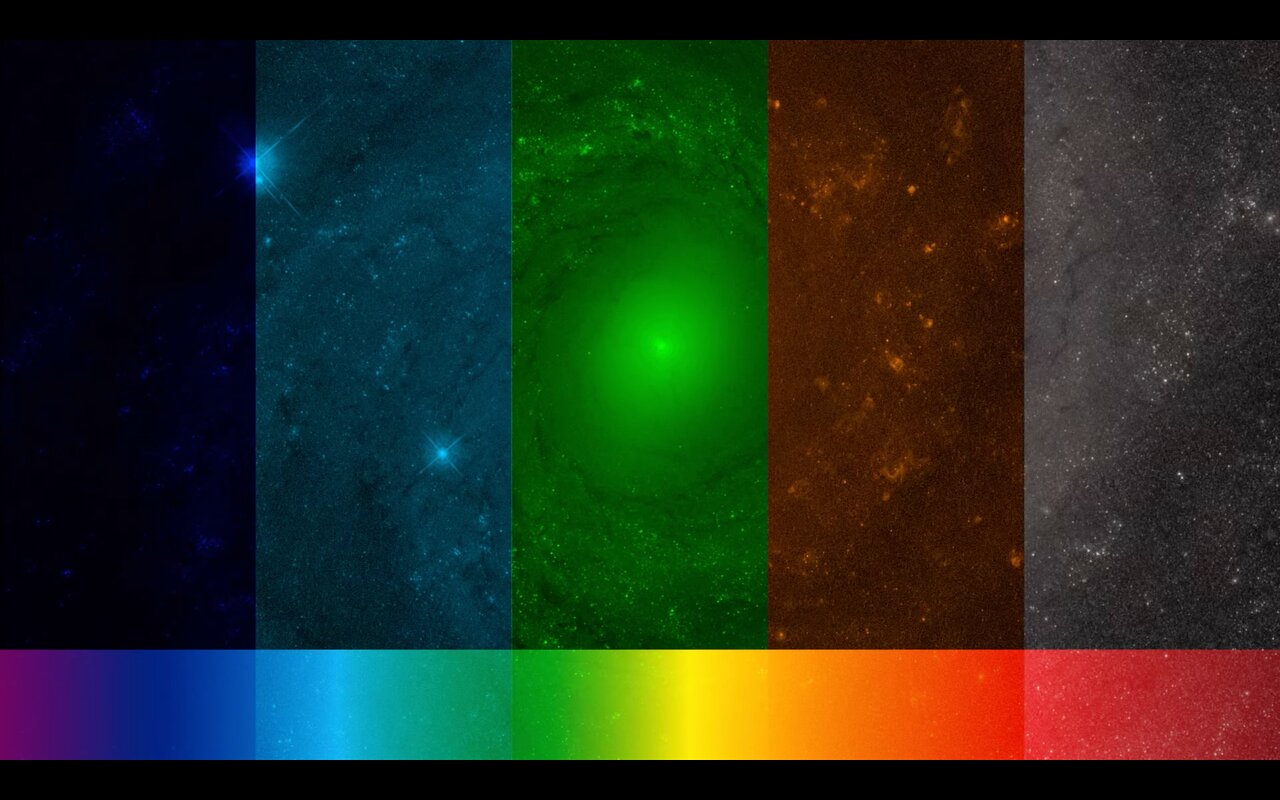 Energy is propagated through space in the form of electromagnetic (EM) waves, which are composed of oscillating electric and magnetic fields. EM waves do not require a substance (like air or water) to travel through, meaning that — unlike sound — they can travel through empty space. In a vacuum, all EM waves travel at the same speed: the speed of light (which is itself an EM wave). Like all waves, an EM wave is characterised by its wavelength, and the range of wavelengths we observe, from very long to very short, is what we refer to as the EM spectrum. We divide up the EM spectrum roughly according to how the waves behave when they interact with matter and each division has a name. So we have: radio waves, which have the longest wavelengths; microwaves; infrared; visible light; ultraviolet; x-rays; and finally gamma rays, which have the shortest wavelengths. Celestial objects such as stars, planets and galaxies all emit EM waves at various wavelengths and so different telescopes are designed to be sensitive to different parts of the EM spectrum. EM radiation in and around the visible part of the spectrum is often referred to broadly as ‘light’, with shorter wavelengths referred to as ‘bluer’ and longer wavelengths referred to as ‘redder’.

By combining observations at different wavelengths, we can develop a more complete picture of the structure, composition and behaviour of an object than the visible wavelengths alone can show.

For more than three decades, Hubble has studied the Universe using its 2.4-metre primary mirror and its five science instruments. They observe primarily in the ultraviolet and visible parts of the spectrum, but also have some near-infrared capabilities. Hubble observes in different wavelength bands, one band at a time, each providing different information on the object under study. Each of these wavelengths is reproduced in a different colour and these are combined to form a composite image that well resembles the true emission from that celestial object.

By exploring this image, you can see how astronomers have used a set of single-colour images to construct the colour picture of a ring of star clusters surrounding the core of the galaxy NGC 1512. Each image represents a specific colour or wavelength region of the spectrum, from ultraviolet to near infrared, and shows the wide wavelength range covered by Hubble. Astronomers chose to study NGC 1512 in these colours to emphasise important details in the ring of young star clusters surrounding the core.

Astronomers use multi-wavelength imagery to study details that might not otherwise be present in visible images. For example, a new multiwavelength observation of Jupiter released in 2020 by Hubble in ultraviolet/visible/near-infrared light of Jupiter gave researchers an entirely new view of the giant planet. These observations provided insights into the altitude and distribution of the planet’s haze and particles and showed Jupiter’s ever-changing cloud patterns. The planet’s aurorae are only visible in the ultraviolet; however, the structure of the red spot is well studied at visible wavelengths.

To celebrate the telescope’s 25th anniversary in 2015, Hubble unveiled two new beautiful portraits of the popular Pillars of Creation, revealing how different details can be studied in visible and near-infrared observations. While the visible light captures the multi-coloured glow of gas clouds, the infrared image penetrates much of the obscuring dust and gas to uncover countless newborn stars.

We invite you to watch this Hubblecast that explores how Hubble’s observations differ across different wavelengths of the electromagnetic spectrum, and how these observations will be complemented by those of the James Webb Space Telescope. 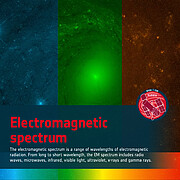