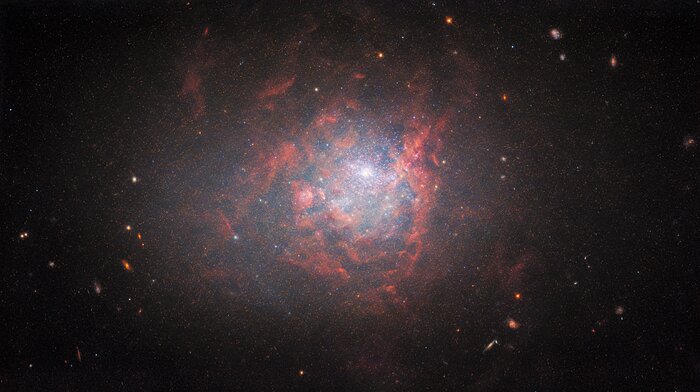 The dwarf galaxy NGC 1705 is featured in this image from the NASA/ESA Hubble Space Telescope. This diminutive galaxy lies in the southern constellation Pictor, and is approximately 17 million light-years from Earth. NGC 1705 is a cosmic oddball — it is small, irregularly shaped, and has recently undergone a spate of star formation known as a starburst.

The data shown in this image come from a series of observations designed to unveil the interplay between stars, star clusters, and ionised gas in nearby star-forming galaxies. By observing a specific wavelength of light known as H-alpha with Hubble’s Wide Field Camera 3, astronomers aimed to discover thousands of emission nebulae — regions created when hot, young stars bathe the clouds of gas surrounding them in ultraviolet light, causing them to glow.

This is not the first time that NGC 1705 has been imaged by Hubble — astronomers peered into the heart of the galaxy in 1999 using Hubble’s workhorse camera at the time, the Wide Field Planetary Camera 2. This instrument was replaced with the Wide Field Camera 3 during the fifth and final Space Shuttle mission to Hubble in 2009, and the newer instrument has provided a richer and far more detailed portrait of NGC 1705 than the 1999 observation.