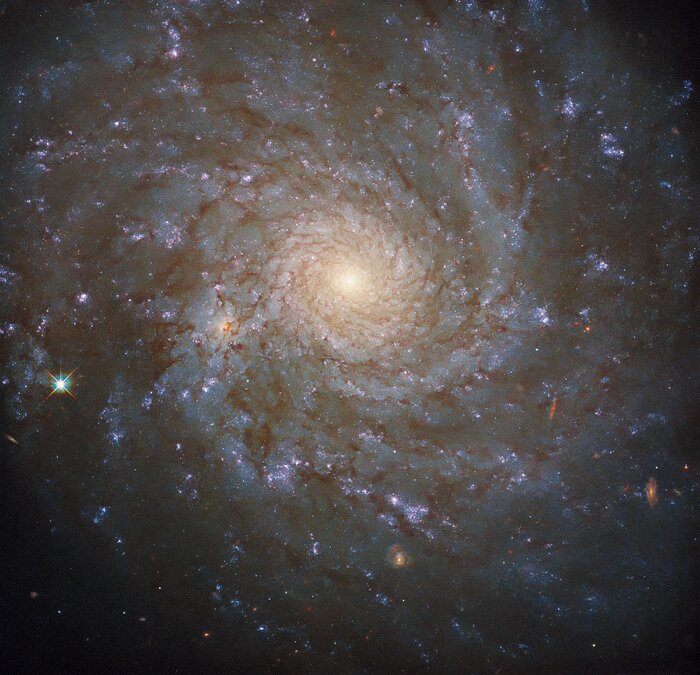 This cosmic portrait — captured with the NASA/ESA Hubble Space Telescope’s Wide Field Camera 3 — shows a stunning view of the spiral galaxy NGC 4571, which lies approximately 60 million light-years from Earth in the constellation Coma Berenices. This constellation — whose name translates as Bernice’s Hair — was named after an Egyptian queen who lived more than 2200 years ago.

As majestic as spiral galaxies like NGC 4571 are, they are far from the largest structures known to astronomers. NGC 4571 is part of the Virgo cluster, which contains more than a thousand galaxies. This cluster is in turn part of the larger Virgo supercluster, which also encompasses the Local Group which contains our own galaxy, the Milky Way. Even larger than superclusters are galaxy filaments  — the largest known structures in the Universe.

This image comes from a large programme of observations designed to produce a treasure trove of combined observations from two great observatories: Hubble and ALMA. ALMA, The Atacama Large Millimeter/submillimeter Array, is a vast telescope consisting of 66 high-precision antennas high in the Chilean Andes, which together observe at wavelengths between infrared and radio waves. This allows ALMA to detect the clouds of cool interstellar dust which give rise to new stars. Hubble’s razor-sharp observations at ultraviolet wavelengths, meanwhile, allows astronomers to pinpoint the location of hot, luminous, newly formed stars. Together, the ALMA and Hubble observations provide a vital repository of data to astronomers studying star formation, as well as laying the groundwork for future science with the NASA/ESA/CSA James Webb Space Telescope.