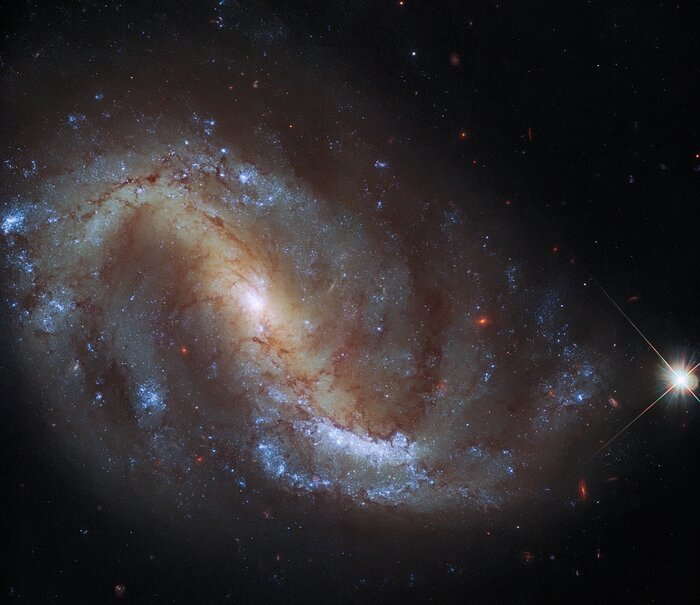 This image from the NASA/ESA Hubble Space Telescope shows the barred spiral galaxy NGC 7496, which lies over 24 million light-years away in the constellation Grus. This constellation, whose name is Latin for crane, is one of four constellations collectively known as the Southern Birds. The others are Pavo, Phoenix and Tucana, which depict a peacock, phoenix, and toucan respectively. The rest of the night sky is also home to a flock of ornithological constellations, including an eagle (Aquilla), swan (Cygnus), crow (Corvus), and dove (Columba).

This image comes from a collection of observations delving into the relationship between young stars and the cold, dense clouds of gas in which they form. In addition to observations with Hubble’s Wide Field Camera 3 and Advanced Camera for Surveys, the astronomers behind this project gathered data using the Atacama Large Millimeter/submillimeter Array (ALMA), one of the largest radio telescopes in the world.

As well as shedding light on the speed and efficiency of star formation in a variety of galactic environments, this project is also creating a treasury of data incorporating both Hubble and ALMA observations. This treasure trove of data from two of the world’s most capable observatories will contribute to wider research into star formation, as well as paving the way for future science with the James Webb Space Telescope.