Celestial Cloudscape in the Orion Nebula 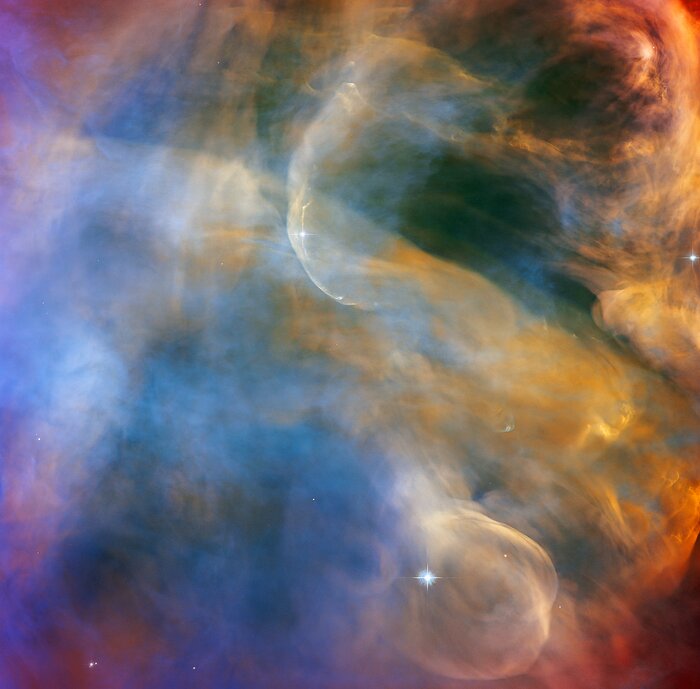 This celestial cloudscape from the NASA/ESA Hubble Space Telescope captures the colourful region surrounding the Herbig-Haro object HH 505. Herbig-Haro objects are luminous regions surrounding newborn stars, and are formed when stellar winds or jets of gas spewing from these newborn stars form shockwaves colliding with nearby gas and dust at high speeds. In the case of HH 505, these outflows originate from the star IX Ori, which lies on the outskirts of the Orion Nebula around 1000 light-years from Earth. The outflows themselves are visible as gracefully curving structures at the top and bottom of this image, and are distorted into sinuous curves by their interaction with the large-scale flow of gas and dust from the core of the Orion Nebula.

This observation was captured with Hubble’s Advanced Camera for Surveys (ACS) by astronomers studying the properties of outflows and protoplanetary discs. The Orion Nebula is awash in intense ultraviolet radiation from bright young stars. The shockwaves formed by the outflows are brightly visible to Hubble, but the slower-moving currents of stellar material are also highlighted by this radiation. That allows astronomers to directly observe jets and outflows and learn more about their structures.

The Orion Nebula is a dynamic region of dust and gas where thousands of stars are forming, and is the closest region of massive star formation to Earth. As a result, it is one of the most scrutinised areas of the night sky and has often been a target for Hubble. This observation was also part of a spellbinding Hubble mosaic of the Orion Nebula, which combined 520 ACS images in five different colours to create the sharpest view ever taken of the region.