Nebulae are interstellar clouds of gas and dust. Many nebulae are formed from the remnants of dying stars. Nebulae are often also regions where new stars are born.

Nowadays, the term ‘nebula’ refers to an interstellar cloud of dust and gas. Nebulae are often formed from the remnants of dying stars: from planetary nebulae or the dispersed debris from supernova explosions. They are also often regions of intense star formation, as the rich reservoirs of dust and gas provide the necessary raw material from which new stars are born. Nebulae are often mind-bogglingly big, spanning several light years in size. The word ‘nebula’ used to have a much broader meaning, referring to any celestial object that appeared to have a diffuse structure, including the objects that we now know as galaxies.

The large mosaic of 15 Hubble images showing the central part of the Orion Nebula complex is one of the most detailed images of a star- forming region ever made. Hubble’s high resolution has been crucial in the investigation of the dust discs, dubbed proplyds, around the new born stars in this nebula. The ‘proplyds’ may very well be young planetary systems in the early phases of their creation. The details that Hubble revealed are better than what has been achieved with ground-based instruments, and thanks to Hubble we today have visual proof that dusty discs around young stars are common.

Hubble’s Wide Field Camera 3 instrument is designed to make detailed images in both visible and infrared light, and offers greatly improved capabilities in the infrared, which allow Hubble to peer through the dust and gas of nebulae and observe the newborn stars. Dust clouds scatter visible light, but let infrared light through unimpeded, meaning infrared observations are often the only way to see the full extent of the star formation in the region.

Using Hubble, astronomers have also caught a rare glimpse of the nebula Hen 3-1357, nicknamed the Stingray Nebula, fading precipitously over just the past two decades. Even though the Universe is constantly changing, most processes are too slow to be observed within a human lifespan. However, the Stingray Nebula offered researchers a special opportunity to observe a system’s evolution in real time. Images captured by Hubble in 2016, when compared to Hubble images taken in 1996, showed a nebula that has drastically dimmed in brightness and changed shape. 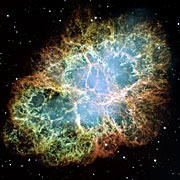 Image A
Most detailed image of the Crab Nebula 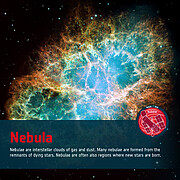 Nebula
Nebulae are interstellar clouds of gas and dust. Many nebulae are formed from the remnants of dying stars. Nebulae are often also regions where new stars are born.